Hypocrisy: It's The Conservative Way

Is hypocrisy the same as lying?  Almost...

So let's take a look at some of the news, opeds, and memes today to find out how hypocrisy is the Conservative way...first, here's how they address good news from a black president...

"The good news is that the U.S. economy added 257,000 jobs in January, accompanied by a rise in wages and the more than 700,000 Americans who had given up on finding a job resuming their search.  That increased number of job seekers had a slight negative effect on the jobless numbers, raising the unemployment rate from 5.6 percent to 5.7 percent...

"...The bad news is that the new GOP controlled congress has already gone to work to kill the recovery that has finally begun to be felt by the middle class and working poor.

"One of the first orders of business in the 114th congress was to pass the Keystone XL Pipeline Act which they claim will create tens of thousands of jobs while making the U.S. energy independent.

"At the same time they refused to include provisions that would keep that oil in the U.S. and that would require that the steel and iron used in construction be made in the U.S.

"Sen. Rand Paul (R-KY) and House Republicans have introduced separate “right to work” bills which would amend the National Labor Relations Act to prohibit employers from entering into contracts which require an employee to join or pay dues to a union.

"The GOP has already passed three other deregulation bills favoring business as well which the president has promised to veto."

And the Cons have other new ideas for us, so they aren't all that hypocritical, are they?

And hypocrisy isn't as bad as lying anyway...

Besides, why should such knowledgeable and patriotic Americans like the Cons have to lie and dissimulate anyway?

Conservatism is filled with people who know all about economics and stuff, so they don't have to lie when they're campaigning for office...

And what's so hypocritical about wanting a balanced budget anyway? And why shouldn't we believe in "limited government?" 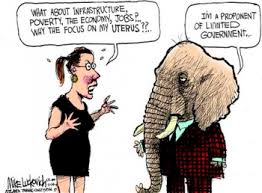 So let's check in with the Hypocrisy Meter...oopsie, never mind! 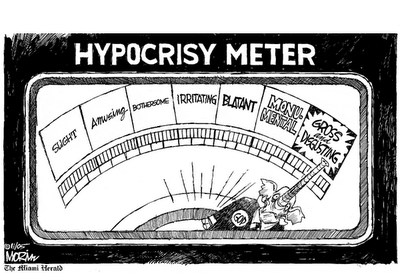 While we're at it, when we're at war no American president would indulge in lies, hyperbole, or hypocrisy...would he?

"Ronald Reagan’s wartime lies: The president had quite a Brian Williams problem."

"Reagan’s fibs were manifold. They included his campaign-trail tale of a 'Chicago welfare queen' with 80 aliases, 30 addresses, and 12 Social Security cards, whom he alleged had claimed 'over $150,000' in government benefits. The woman whom Reagan made infamous was convicted of using only two aliases, used to collect $8,000.

"Once in office, Reagan’s deception in the Iran-Contra scandal briefly threatened his presidency. First, Reagan flatly denied wrongdoing, publicly declaring, 'We did not — repeat, did not — trade weapons or anything else for hostages, nor will we.' Months later, when subsequent revelations rendered that assertion untenable, Reagan delivered an Oval Office address in which he tried to reconcile his public claims with the factual record. 'A few months ago, I told the American people I did not trade arms for hostages,' Reagan said. 'My heart and my best intentions still tell me that’s true, but the facts and the evidence tell me it is not.'


"But Reagan’s fabrications also included whoppers about conflict zones reminiscent of those put forth by Williams and Clinton. During Israeli Prime Minister Yitzhak Shamir’s November 1983 visit to the U.S., Reagan told Shamir that during his service in the U.S. Army film corps, he and fellow members of his unit personally shot footage of the Nazis’ concentration camps as they were liberated. Reagan would tell this story again to others, including Holocaust survivor Simon Wiesenthal. But Reagan was never present at the camps’ liberation. Instead, he spent the war in Culver City, California, where he processed footage from the liberation of the camps..."

Is it hypocrisy when older white male Conservatives turn the sound off when the news is on, or just some sort of passive-aggressive nonsense?

Some Conservative pols feel that hypocrisy is a virtue when there are more important matters to contend with...

But in the end, it pays to acknowledge their hypocrisy...

So children, don't let your moms grow up to be rightwingers..

There's a reason that one party lies, distorts, and deals in hypocrisy 24/7...

Because that party isn't a democratic party, it's the GOP, and they HAVE to lie...because beneath all those phony issues of abortion and "states rights" they don't believe in what they mouth for their followers anyway.

What they really want is what the richest and greediest in our country want:

Unleashed capitalism in the form of monopolies.

All the rest of those social issues are smoke and mirrors, gang.

So before it's too late,don't you think it's high time we criminalized "Conservatism?"

"A Conservative Government is an organized hyBpocrisy."