When Money Is Equal To Speech

Conservative elements on the Supreme Court of The United States has been expanding their definitions of people, speech and money that goes something like this:


Who in the world would want such a law, anyway?

And who are the beneficiaries of the rulings by the troglodytes in the SCOTUS?  These guys...

And if corporations are people and money equals speech, then what happens in primary season? An obvious question is do we have the same rights as these corporation-people?

The first slap in the face to the People by the new Congress was in passing the Keystone bill, and why do the Cons (along with a few DINOs) support it?

But can they do that, you ask?

It looks like they can if they have all of our marbles...

Maybe we should build a memorial to the Cons' theory of economics and have done with it...

This kind of thinking is what makes the "job creators" so beneficial for mankind!

Because in a Conservative democracy, it's all about who owns that democracy... 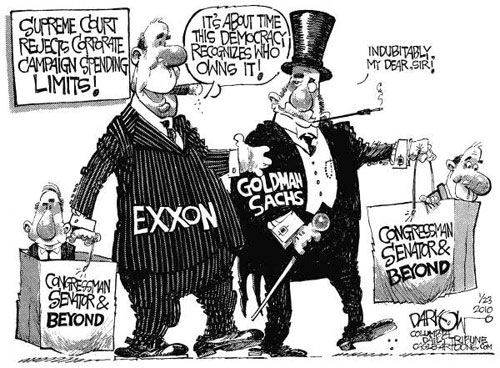 Conservatism has been caught with their pants done in the 21st century as their claim to fame, their phony concern about budget deficits, has crashed and burned and Democrats have proven that only Democrats care about the health of the economy.

Conservatism is all about the money that the rich covet (never mind that pesky 10th commandment), and if you want to be an expert in deciphering Conservative rhetoric, just follow the money.

It's not always about "states' rights," "the right to life," or any of the other smoke screens designed to proselytize the most ignorant and hateful among us to Conservatism's side.

The Founding Fathers had a fear of moneyed interests, especially in the forms of corporations that could buy their new democracy, and if they suddenly came back to life they'd probably get a feeling that we should pass a new law...

"This is the same kind of money that was at the heart of the Watergate
scandals. When you combine unlimited contributions with secrecy, you are
dealing with the most dangerous kind of corrupting money."

Fred Wertheimer, campaign finance reform activist, to the National Journal. The
rise of candidate-specific nonprofits is expected to shroud political influence in
more secrecy than ever in 2016.