Yesterday's post was titled, "It's Tea Bagger Time For The Low Information Voter," and today is a continuation of sorts as we take a very quick look at the GOP's base to find out who they are and where they come from.

First of all, those in the American Taliban all love a good conspiracy -- it keeps their juices flowing and their intellect deadened...

"Here are all the conspiracy theories about Obama in one simple chart." And speaking of the base and good conspiracies, please say hello to Mema!

"If you don’t know Mema (Mee-MAW), you don’t know the internet. Most of us know Mema as the adorably bat-brained grandmother of the angry “Gingers DO have souls!” kid from Daniel Tosh’s eponymous dot-oh show. She was in fact Tosh’s discovery, quickly eclipsing her grandson in internet stardom with her quirky combination of backwoods ignorance, innocent charm and hilariously brief moments of lucid self-awareness. Mema’s the kind of person who loves to talk, but whose best moments come when she actually hears the words coming out of her mouth. And apparently, she’s a big fan of Fox News.

"It’s no secret that Fox’s viewers are old, white, rural and generally confused. While Rupert does love to tout the education level of his (still living) older viewers, but there is a pretty strong flip-side to Fox’s demographic. That is, Mema’s side. The side that’s certain of its opinions, but not sure what its certain about. But hey, credit where it’s due to Fox — that’s the kind of diversity you get from finding and pandering to the lowest common denominator.

"Which, since Married: With Children, has been something of a Fox Network specialty.

So, park your million-mile Dodge on the lawn, don your NO MA’AM t-shirt and have Peg fetch you a beer; it’s time to hear why Mema loves Fox programming..."

But you ask, where do these people come from?

"I Helped Start the Religious Right: Here's How We Tried to Undermine Secular America -- and Build a Theocracy."


"Christian home-schooling is at the core of the project.

"As someone who participated in the rise of the religious right in the 1970s and 1980s, I can tell you that you can’t understand the modern Republican Party and its hatred of government unless you understand the evangelical home-school movement. Nor can the Democrats hope to defeat the GOP in 2016 unless they grasp what I’ll be explaining here: religious war carried on by other means.

"The Christian home-school movement drove the Evangelical school movement to the ever-harsher world-rejecting far right. The movement saw itself as separating from evil “secular” America. Therein lies the heart of the Tea Party, GOP and religious right’s paranoid view of the rest of us. And since my late father and evangelist Francis Schaeffer and I were instrumental in starting the religious right — I have since left the movement and recently wrote a book titled 'Why I Am an Atheist who Believes in God: How to Give Love, Create Beauty and Find Peace' – believe me when I tell you that the evangelical schools and home school movement were, by design, founded to undermine a secular and free vision of America and replace it by stealth with a form of theocracy.

This happened because Evangelical home-schoolers were demanding ever-greater levels of 'separation' from what they regarded as the Evil Secular World. It wasn’t enough just to reject the public schools. How could the Christian parent be sure that even the Evangelical schools were sufficiently pure? And so the Christian schools radicalized in order to not appear to be “compromising” with the world in the eyes of increasingly frightened and angry parents. (My account here of the rise of the home school movement is not aimed at home-schooling, per se, but at parents who want to indoctrinate, rather than educate.)

The Evangelical home school movement was really founded by two people: Rousas Rushdoony, the extremist theologian, and Mary Pride, the 'mother' of fundamentalist home-schoolers. I knew them both well..."

(For the rest of this fascinating expose, go here --> http://www.alternet.org/tea-party-and-right/i-helped-start-religious-right-heres-how-we-tried-undermine-secular-america-and)

Who ARE these guys and what do they want?

I see, but let's get back to some more peeps from the GOP base...like this guy: 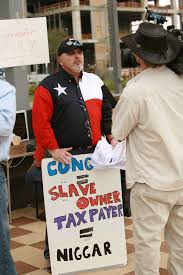 And of course, there's this lady... 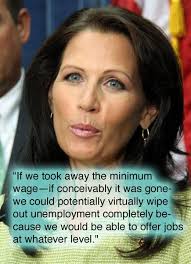 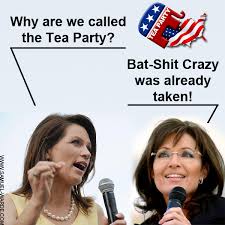 Finally, as we all know, stereotypes are sometimes true and in America one Tea Bagger is typical of the whole bunch of them... To paraphrase a familiar nighttime comic, we kid the GOP...not.

The base of the GOP on the bottom are the intellectually challenged and hate-filled Baggers, but as George W. Bush "joked," the base is really the greediest and wealthiest among us who would steal all we have and brush aside all the people that have to die to achieve their aims.

Conservatism is not only a disease and a force that threatens our democracy daily...

...it's also a criminal cartel by any definintion.

Isn't it time to criminalize "Conservatism" before it's too late? Joyce, Jnr.

"We took the Bible and prayer out of public schools, and now we're having
weekly shootings practically. We had the 60s sexual revolution, and now people
are dying of AIDS."

Christine O'Donnell, at a 1998 appearance on Bill Maher's Politically Incorrect."