Are Democrats And Republicans Really The Same Thing?

There are still some calling out the same sad refrain, "There's no difference between the parties," Ralph Nader is one of them and many of them are "libertarians," BUT there are a few difference that we found...for example:


If a Democrat is opposed to abortion, she doesn't have one.

If a Republican is opposed to abortion, he tries to ban them for everyone except his wife.

If a Democrat is a vegetarian, it's because he wants better treatment for animals.

If a Republican is a vegetarian, it's because he works for Monsanto.

If a Democrat is homosexual, he supports equality for other homosexuals.

If a Republican is homosexual, he leads a gay life in secret while hypocritically condemning that lifestyle in public.

If a Democrat is down-and-out, he thinks about how to better his situation.

If a Republican is down-and-out, he blames his situation on Democrats.

If a Democrat doesn't like a television show, he switches channels.

If a Republican doesn't like a television show, he launches a boycott to get the program cancelled so that no one else can watch it.

If a Democrat is religious, he quietly prays in private, as Jesus said one should.

If a Republican is religious, he demands that everyone be forced to pray along with him.

If a Democrat needs health care, he seeks to ensure that health care is accessible to everyone else as well.

A Republican buys stock in an HMO and campaigns against affordable health care.

If a Democrat reads this, he'll forward it so his friends can have a good laugh.

A Republican will attempt to have the sender arrested.

Some think that the difference between the two parties is brain matter...

Some think it's just a matter of differing strategies... 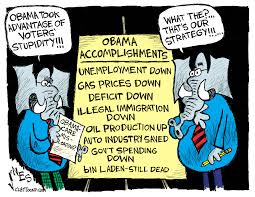 Others think they're just faking it, and we have to be tolerant of their views...

"On Thursday, Sen. Bernie Sanders (I-Vt.) offered a simple amendment to the controversial bill that would authorize construction of the Keystone XL oil pipeline. Sanders' measure, which he proposed to the Senate Energy and Natural Resources Committee, would have declared it the 'sense of Congress' that climate change is real; that it is caused by humans; that it has already caused significant problems; and that the United States needs to shift its economy away from fossil fuels...'"

...because some Republicans are actually "enlightened" when they read something new!

Of course the main distinctions of the GOP is their hatred of "government control..."

But some people believe that there are a few key differences...

And let's face it, the Cons are protecting us against the pervasive "voter impersonation" that is ruining our right to vote...

And the economy just isn't the same under the Repugs...

And both parties look at the truth a bit differently too... 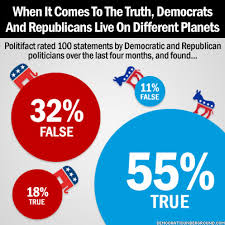 Okay, we were just yanking your chain, there is a difference -- a whole lot of difference...

"Let’s just say it: The Republicans are the problem."

"Rep. Allen West, a Florida Republican, was recently captured on video asserting that there are “78 to 81” Democrats in Congress who are members of the Communist Party. Of course, it’s not unusual for some renegade lawmaker from either side of the aisle to say something outrageous. What made West’s comment — right out of the McCarthyite playbook of the 1950s — so striking was the almost complete lack of condemnation from Republican congressional leaders or other major party figures, including the remaining presidential candidates.

"It’s not that the GOP leadership agrees with West; it is that such extreme remarks and views are now taken for granted.


"We have been studying Washington politics and Congress for more than 40 years, and never have we seen them this dysfunctional. In our past writings, we have criticized both parties when we believed it was warranted. Today, however, we have no choice but to acknowledge that the core of the problem lies with the Republican Party.

"The GOP has become an insurgent outlier in American politics. It is ideologically extreme; scornful of compromise; unmoved by conventional understanding of facts, evidence and science; and dismissive of the legitimacy of its political opposition..." (Our italics.)

(Click here for the rest of the story --> http://www.washingtonpost.com/opinions/lets-just-say-it-the-republicans-are-the-problem/2012/04/27/gIQAxCVUlT_story.html)

So there are huge differences, and one BIG problem: The Misinformed Voter and The Low Information Voter!

"One can only wonder why average working class Americans would vote for a party that is so obvious in their bias towards the wealthy. It would make sense that someone in the top 1 percent of the income bracket would vote for the Republican party since they have the wealthiest American's best interest at heart. You could even make the case that highly religious Christians would vote for Republicans even though, at times, they vote against their own best economic interests. So the question remains, while scratching your head, why do working class Americans vote for Republican candidates?..."

"...Average Americans need to be more informed about what is going in the country, but also where to get their information. The argument isn't about holding a liberal or conservative ideology, it's about facts that are based on truth and not information based on twisted logic. Americans need to learn to dig a little deeper to find honest reporting, not just believe something that falls in their lap at the expense of a billionaire funded think tank or news organization..." 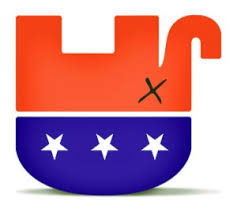 So the next time you hear that old refrain that there's no difference between the parties, try to figure out why they're saying it.  Nader and the libertarians dream of conquering the two main parties, without stopping to see that one of them is the largest criminal cartel the world has ever known.

And others are just badly-informed parrots who subscribe to their local papers for the sports and the funnies.

These are the Low Information Voters and Misinformed Voters who not only vote against their best interests, their votes are votes against democracy. (Joyce, Jnr.)

"In this world of sin and sorrow there is always something to be thankful for; as
for me, I rejoice that I am not a Republican."