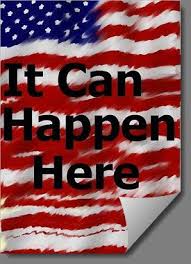 Are you still sure that "both parties are alike?"

The prescient It Can't Happen Here by Sinclair Lewis was years ahead of its time, when you consider the success by the Conservative "movement" in chipping away our democratic principles.

Their "movement" is a movement towards a totalitarian, fascist world that can be titled, The New American Feudal Age, but how are the Cons able to do this in a participatory democracy?  Usually by lying about their beliefs to get into office, stealing your vote, or suppressing it - then enacting legislation to remove all safeguards to the People, while giving their wealthy benefactors the largest tax cuts imaginable.

But here are the tried and true ways to make it happen here that have worked for Conservatism, at least since we saw them in operation in the German beer halls in the 30s... 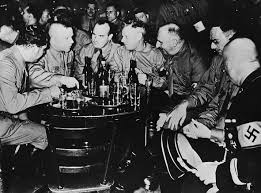 Here is the recipe for Conservatism exeptionalism: First, add a dollop of authoritarianism...

Then you wipe out the poor...

"Capitalism Unchained: The Six-Step Process to Wipe Out the Poor Half of the US."

"One of the themes of the superb writing of Henry Giroux is that more and more Americans are becoming 'disposable,' recognized as either commodities or criminals by the more fortunate members of society. There seems to be a method to the madness of winner-take-all capitalism. The following steps, whether due to greed or indifference or disdain, are the means by which America's wealth-takers dispose of the people they don't need.


"Recent analysis has determined that half of America is in or near poverty. This is confirmed by researchers Emmanuel Saez and Gabriel Zucman, who point out: 'The bottom half of the distribution always owns close to zero wealth on net. Hence, the bottom 90% wealth share is the same as the share of wealth owned by top 50-90% families - what can be described as the middle class...'"

After all, who needs a "living wage?"

The corporations will help us out in their role of executive chef, of course...

And here is their recipe for the rest of us, until there are no more "us..."

Because it worked in the past...

And in the thought processes of the average Conservative, that's a "Good Thing..."

Unless you're some kind of idiot...

...because that's the way they like it - it's called American Exceptionalism:

So for those who can't remember history, here is a Blast From The Past, coming to an election just for you... America's descent into feudalism has been described in 10 easy steps, and no one knows this better than your friendly, neighborhood Conservative.

The Cons have always hated our Constitution, with all its democracy and stuff.

Shouldn't their takeover attempts qualify as a criminal action, and shouldn't organized criminal cartels be abolished?

"I cannot help fearing that men may reach a point where they look on every
new theory as a danger, every innovation as a toilsome trouble, every social
advance as a first step toward revolution, and that they may absolutely refuse
to move at all."