The Sleaziness of Fox News 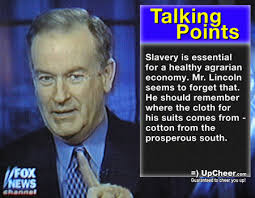 Whether you call then Faux News or Fox Snooze, there's no doubt about it: Fox is the GOP house organ, filled with partisan propaganda, and sympathetic towards Teabagger Conservatives - but wholly committed to spreading the marching orders of the Republican Party.

But lies and hypocrisy aside, Fox is the sleaziest network on the planet. "Earlier this year Fox News fortified their rabidly right-wing roster of Republican PR flacks by hiring Roger Stone, a veteran GOP dirty trickster and notorious Clinton hater. Stone cut his teeth in the nastiest campaigns of Richard Nixon and in 2008 he founded a group to oppose Hillary Clinton’s primary campaign that he called 'Citizens United Not Timid,' or C.U.N.T. He said that the group’s mission was 'to educate the American public about what Hillary Clinton really is.'

Well, Fox is getting their money’s worth as Stone makes appearances on the 'news' network spewing outrageous allegations and vile insinuations that set the bar for decency at new lows. Last week Stone visited the Kurvy Kouch Potatoes at Fox & Friends (video below) to hurl his trademark insults and innuendo. He was asked by Elizabeth Hasselbeck for some 'insight with Hillary Clinton’s relationship with Wall Street.' Stone’s answer began predictably by asserting that it 'causes her real problems.' Of course, if she had no relationship with Wall Street that would also be a problem. Fox is hard-wired so that anything that happens, or doesn’t happen, is a problem for Democrats. But then he swerved to inject an unrelated criticism from far-right field.


"Frankly, the much greater issue is the new public Bill Cosby scandal, which is gonna cause a reexamination of the problems of Bill Clinton and what Hillary knew about those actions and what she did to suppress them. So I think the Bill Cosby issue, as it were, could be a real problem for Bill Clinton and, therefore, for Hillary Clinton."


"Yes. That’s 'the much greater issue.' A twenty year old incident of marital infidelity that is in no way analogous to Bill Cosby. Clinton’s affairs were consensual and, by all accounts, they stopped twenty years ago..."

And here's another one... Then there's Bill O'Lielly and his made-up war...

"Every year without fail the 'War On Christmas' begins once again, and every year without fail we see the same tired old memes and talking points from the same old sources about how we need to 'Put Christ Back In Christmas.' Whether it’s Sarah Palin hawking another lousy book which is released just in time for the Christmas shopping season (complete coincidence, I’m sure) or Bill O’Reilly’s annual kvetching about the “Secular Progressive assaults on the traditions of Christmas” – enough is enough.

"It’s not just these two self-promoting snake oil salespeople spreading misinformation for a buck – there’s millions of people out there who are actually convinced that people like myself and others who believe fully in the separation of church and state are coming for their Christmas. It’s also not a surprise that many of the same people think that Obamacare has death panels, that the government is coming to take their guns, or that gay marriage will somehow be a threat to their own heterosexual union. Let’s be absolutely clear – there isn’t a 'War On Christmas' and nobody is trying to outlaw the holiday. Nobody is going to come and seize your tree or take little Bobby’s presents from under it like The Grinch. This whole fake outrage is nothing more than a gimmick by opportunistic individuals to drive TV ratings and book sales. Christmas isn’t going anywhere; in fact, the holiday now seems to stretch from before Halloween until the dried out tree hits the curb around New Year’s Eve..."

Naturally, Fox believes the people in the Tea Party who have told us they are color-blind...

And we should believe them because in the words of their fearless leader...

Like all good journalists, they investigate all the stories fit to print... 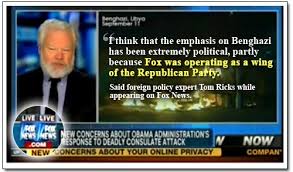 ...leading us to wonder: 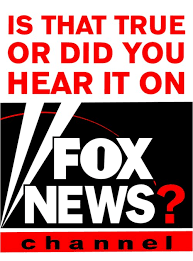 But that's okay, because Fox can defend all of its lies! 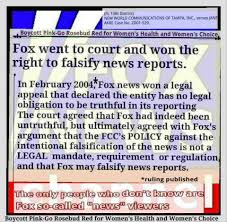 Naturally,no one would support the idea of "banning deception from all news broadcasts" because of that pesky First Amendment idea of free speech.

Free speech isn't an objection to criminalizing Conservatism: Conservatism is as dangerous as a panic in a darkened theater and needs to be abolished NOW.

"Fox News is nothing if not impressive. No matter how harsh the criticism it
endures, the network somehow always manages to prove itself even worse than
we had previously imagined."