Now That You Elected Them, What Are The Conservatives Going To Do For You?

With the lowest turnout since 1942, when Americans were busy with a war, listening to the Conservative rhetoric, the voters captured both houses of Congress.

Were these voters hoping that a change of political philosophy would change things for the better?  Were the Low Information Voters hoping for a better financial future than the one that the Cons have brought to us since the heyday of the billionaires' best friend, Ronald Reagan?

Let's take a look and see what voters from the working class and parents can expect for their votes from the class warfare party...

"When working people elect Republicans, they get screwed.

"First, some data. In the recent midterm elections, a study by the Public Religion Research Institute found that white working-class voters—defined as those lacking a college degree, and whose jobs paid an hourly wage—voted for the Republican over the Democrat for Congress by a whopping margin of 61 percent to 26 percent.

"Got that? Good. Also, the "vast majority" of recipients of the Earned Income Tax Credit—and remember, that credit only goes to people who earn enough money that, without it, they'd be paying income taxes—are white, according to data collected by the National Bureau of Economic Research. Finally, the 2009 Obama stimulus package expanded the Child Tax Credit to make more working class families eligible. We don't have exact data on the racial composition of those who benefited from the expansion, but given that about half of families in poverty are white, we can extrapolate that somewhere around half of beneficiaries are white.

"Still with me? Okay. Now check this out, from a New York Times article about a deal in the works that centers around making corporate tax cuts permanent:

"The emerging tax legislation would make permanent 10 provisions, including an expanded research and development tax credit, which businesses and the Obama administration have wanted to make permanent for years; a measure allowing small businesses to deduct virtually any investment; the deduction for state and local sales taxes; the American Opportunity Tax Credit for college costs; deductions for employer-provided mass transit; and four different breaks for corporate and charitable giving."

"Smaller measures already passed by the Senate Finance Committee, from tax breaks for car-racing tracks to benefits for racehorse owners, would be extended for one year and retroactively renewed for the current tax year."

"[snip] Left off were the two tax breaks valued most by liberal Democrats: a permanently expanded earned-income credit and a child tax credit for the working poor. Friday night, Republican negotiators announced they would exclude those measures as payback for the president’s executive order on immigration, saying a surge of newly legalized workers would claim the credit, tax aides from both parties said."


"It's worth noting that the deal would also mean the expiration, in 2017, of tax credits that support the development of wind power because, oh noes, the oil and gas industry thinks they are unfair. Doesn't the oil and gas industry receive billions in tax breaks? Er, well, hey, look over there!" (Click here for the rest of the story: http://www.dailykos.com/story/2014/11/26/1347681/-GOP-payback-to-white-working-class-who-voted-them-in-cut-earned-income-tax-and-child-tax-credit?detail=facebook)

But we're just following the Cons' Roadmap To The Future... 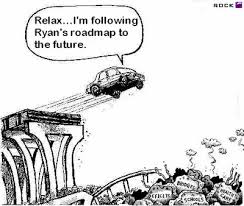 And you can bet the Repubs are going after the President...

Because the President is a bad (black) man...

And the extremists you elected have their responsibilities, you know...even if it means punishing the people who elected them.

Especially on the holidays when they can hate everybody...

Because Democrats legislate, while Republicans investigate...

After all, there ARE differences between the guys you elected and those other guys...

You'd think after the Cons caused the Great Depression, the recent almost-depression, AND the policies that have driven the middle class into the downtrodden masses that Conservatives hate so deeply, that eligible voters would wake up.

AND you'd think the Low Information Voters would pay attention to the Cons who are picking their pockets.

It's all part of the game, gang. All part of the game where we all pretend that the Republican Party isn't made up of the largest criminal cartel in history that wants to take us down the road to the New American Age of Feudalism.

We can always try criminalizing Conservatism and bringing the Cons to justice, but then they wouldn't be able to take our money and kill off whoever stands in the way of their bottom line profits.

And that is not the American Way.

"Conservatism discards Prescription, shrinks from Principle, disavows Progress;
having rejected all respect for antiquity, it offers no redress for the present, and
makes no preparation for the future."