Now that the results are in after a third of America's eligible voters put the Cons in control of Congress, how will they help get us back on our feet again?

Naturally, they'll want to work with our President as an equal partner and forget all about that call for class warfare...

"Republicans don’t want their leaders working with President Obama. At all." "In the wake of the last Tuesday's election, President Obama, incoming Senate Majority Leader Mitch McConnell and Speaker John Boehner all offered rhetorical bows to bipartisanship. But, a new post-election poll conducted by the Pew Research Center shows that two-thirds of Republicans have little interest in their top elected leaders trying to find common ground with the president.

"Sixty six percent of Republicans said the they would prefer party leaders 'stand up' to Obama 'even if less gets done in Washington' while just 32 percent preferred GOP top brass 'work with Obama, even if disappoints some GOP supporters.'  That view stands in direct opposition to the view of the broader electorate on that question; 57 percent of all Americans prefer that Republicans work together with Obama while 40 percent favor GOP leaders standing up to the president. Among Democrats, a majority (52 percent) say that Obama should work with Republicans "even if it disappoints some Democratic supporters" while 43 percent would prefer they "stand up" to Republicans even if it means getting less done..."

The GOP has, of course, a long history of accomplishments and more than its share of political heroes...

Because that's the way they are...

"You knew it was true. Now research proves it! The real motivation behind Rush, Sterling and defenses of awfulness.

"It’s not the least bit surprising that Rush Limbaugh is still defending Donald Sterling, spinning an elaborate conspiracy theory about how Sterling was 'set up,' as Elias Isquith described here at Salon: 'Whoever set this up,' Limbaugh said with understated drama, 'is really good.'

"He continued: 'They covered every base. They’ve got the media wrapped around their little finger. I mean, when you get rid of the anthem singer — I used to be in charge of anthem singers at the Kansas City Royals. When you can get rid of (the) anthem singer, you’ve got power.'

"Sure, it’s so far gone it’s silly, but defending old white guys is Limbaugh’s thing. Especially rich old white guys. And when he does it, he’s simply being a good conservative. Defending wealth, power, privilege, hierarchy — it’s just what conservatives do. Now, however, some folks — including social scientists — are beginning to ask, in effect, if they’re not actually defending, even promoting, evil as well.

"Sterling’s self-immolating drama vividly illustrates what the questions involve. It’s not just that Americans — unbeknownst to Sterling, Cliven Bundy and Limbaugh — have come to an overwhelming consensus that racism itself is evil, though that’s certainly enormously important in and of itself. But there’s also the additional factor of interpersonal depravity — psychopathy, if you will, which people are increasingly coming to see as significantly overrepresented in the 1 percent..."

There won't be any nonsense like judicial activism to stain their reputation...as long as you stay alive.

And the Cons are really concerned about our democracy too...

As long as Democrats watch their step!

Because the Republicans are on the loose...

Because we can trust them...

Because they get things done...

They'll rid us of all those parasites.

And here is a little peek into our future as a Conservative nation from our friends at Propublica...

"A terrifying precedent: Woman to be tried for murder for giving birth to stillborn." "A new 'fetal harm' case could open door for women to be prosecuted for everything from miscarriage to abortion.

"Rennie Gibbs’s daughter, Samiya, was a month premature when she simultaneously entered the world and left it, never taking a breath. To experts who later examined the medical record, the stillborn infant’s most likely cause of death was also the most obvious: the umbilical cord wrapped around her neck.

"But within days of Samiya’s delivery in November 2006, Steven Hayne, Mississippi’s de facto medical examiner at the time, came to a different conclusion. Autopsy tests had turned up traces of a cocaine byproduct in Samiya’s blood, and Hayne declared her death a homicide, caused by 'cocaine toxicity.'

"In early 2007, a Lowndes County grand jury indicted Gibbs, a 16-year-old black teen, for 'depraved heart murder' — defined under Mississippi law as an act 'eminently dangerous to others…regardless of human life.' By smoking crack during her pregnancy, the indictment said, Gibbs had 'unlawfully, willfully, and feloniously' caused the death of her baby. The maximum sentence: life in prison.

"Seven years and much legal wrangling later, Gibbs could finally go on trial this spring — part of a wave of 'fetal harm' cases across the country in recent years that pit the rights of the mother against what lawmakers, health care workers, prosecutors, judges, jurors, and others view as the rights of the unborn child..."

Because in the final analysis the Conservatives are really looking after the interests of their own people... 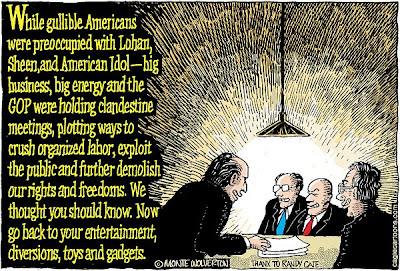 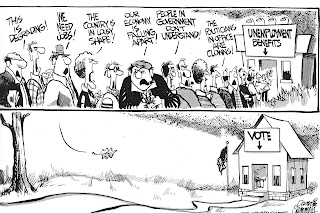 As we noted in the beginning of this piece, a third of eligible voters made it to the polls this year.  And did you notice the usual Hollywood Dems campaigning this time?

With democracy at stake, we stayed at home, leaving the Low Information Voters to carry the Cons' water and now we'll pay for it.

If Conservatism were against the law, this post wouldn't exist.

"Conservatives divide the world in terms of good and evil while liberals do it in terms
of the rich and poor."