The Incredible Stupidity of The Average Conservative, Part 2

We continue with our survey of stupid Conservatives with a few looks at what happened when some stupid people voted and when others stayed at home on Election Day...

You didn't think that was all, did you?  Here's more for you voters and non-voters...

And here is more of the same, with a little more detail...

The Cons have even told us their plans for you, even if you voted for them...

This, of course, is from a typical stupid Conservative...

But the Cons aren't going to be stupid anymore -- really... 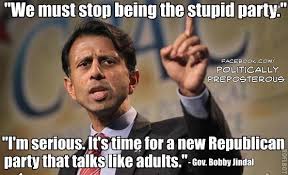 But finally, there might be a reason so many people are so stupid...

We've talked about Conservative stupidity on this site for quite awhile, wondering what we can do with the intellectually challenged Conservative Sheeplets once Conservatism is criminalized.

It appears that their stupidity is merely a genetic defect, and rather than trying to "cure" them, it is best to relegate them to the jobs that take the least intelligence during the day, sending them to re-education camps at night.

Perhaps courses in Critical Thinking, history, economics, and civics might help return these dummies to a normal life...but we are not optimistic.

"We spent a lot of time talking about Africa, as we should. Africa is a nation that
suffers from incredible disease."