The Midterm Election: One Step Closer To Oligarchy

Actually, this is what happens when PEOPLE don't vote.  Voters did put a second-rate actor in the White House in 1980 but subsequent elections were quite different, and in the end the results were the same... "In some of the Senate races that went to the GOP, the experience gap between the old guard and the new is vast. Without further ado, meet some of your new Republican bosses.

C"Harkin, 74, was elected to the Senate when Judas Priest and Whitesnake were releasing albums. (Ahem, 1984.) When Harkin was a young congressional staffer in 1970 -- the year Ernst was born -- he exposed the 'tiger cages' in Vietnam, where protesters and students were tortured. Later, he authored the Americans with Disabilities Act, established television closed-captioning, helped secure a United Nations treaty to end abusive child labor, and created a program to reward farmers for not ruining the environment.

"Ernst, 44, was elected to Iowa state Senate about three years ago, following a distinguished two-decade career in the military. When BuzzFeed recently accused her of ripping her newspaper op-eds from party boilerplates, her spokesperson said, “Ernst is not a career politician, she is a part-time citizen legislator.” She has expressed support for getting rid of the Environmental Protection Agency and the Department of Education, and for impeaching Obama.

The Cons cheated as usual, because nobody can stop them...

"Problems reported at polls vary from state to state."

"The Election Protection Hotline, a phone line manned for voters to report problems, had received 18,498 calls by 8 p.m. ET, according to a spokesman for the Lawyers Committee for Civil Rights Under Law, which led the effort. 1,967 came from Florida, 1,876 from Texas, and 1,815 from Georgia.

"In Florida, the campaign of Charlie Crist, the Democratic candidate for governor, filed a court motion late Tuesday afternoon – which was ultimately denied – asking to extend voting hours in Broward County from 7 p.m. to 9 p.m. One polling site was offline for over an hour causing major delays, the campaign said..."

When the fix is in, anyone can win...

But the sad truth is that people are also uninformed and they don't care...

And even though the Founding Fathers are probably spinning in their graves...

Here is the dirty, little secret that the Cons know so well...

Because hate and fear is a huge motivator...

And too many voters really don't get it...

BUT the bottom line is that if you voted the right way, you can continue the Good Fight! 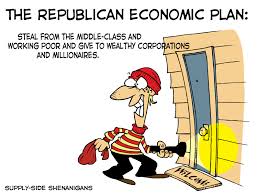 The underlying news is that when one party controls both Houses, they tend to grab the presidency two years later. It's class warfare, and your class is losing badly.

There's no doubt that this election was lost by the Democrats, not won by the Cons, and what we're getting for letting them win is a Congress that will do everything in their power to take down the middle class and the working poor.

And here is what the Cons did to grab even more power... Do you still think that Conservatism is an honest political philosophy and that they aren't in a criminal class all by themselves?  Do you think they'll ever stop fixing our elections through voter intimidation, voter suppression, and vote theft?

Here is the solution...

"Bad officials are elected by good citizens who do not vote."