Why DO We Call Conservatives "Right-Wing Nut Jobs?"


Harry Truman once said, "Democrats work to help people who need help. That other party, they work for people who don’t need help. That’s all there is to it." That's what Conservatism stand for, but some add the fact that the Cons are rightwing nut jobs that should be locked up before they kill again.

Are the Cons criminally insane, or are they just criminals...let's see if class warfare needs help from the clinically insane:

"They're Called Right-Wing Nut Jobs For A Reason: These People Are Clinically Insane."

"Just when I think there’s no possible way these far-right sociopaths can sink any lower, they prove me wrong. It’s one thing to distrust the government; I think it’s healthy to be skeptical, but. . .

"This country was founded by men who did not see eye-to-eye on every issue, which is why they devised a system of checks and balances which allowed for divergent opinion and a stable government. Too many of today’s right-wing pundits and politicians, however, aren’t just disagreeable — they’re certifiably insane.

"Yes, I know that anything that comes out of Rush Limbaugh’s pie hole is designed to increase ratings and keep himself 'in the news.' A week without progressive, liberal outrage over some idiotic invention from his diseased imagination is just another missed opportunity to cash in on a dwindling advertiser base.

"The problem, as I see it, is 'normal people' (okay, Republicans) actually believe Rush when he posits 'people at the highest levels of our government' think Americans should get Ebola and die because of slavery. Wait, what? Ask him directly and he’ll deny saying it, calling the accusation another attempt by the left 'to smear me with this Ebola business.' Fine — judge for yourself..."

Not convinced? Okay, here's something straight from the GOP nuthouse, Fox News.  Are they crazy, or just "crazy like a fox?" "With just one week left before the consequential midterm election, the crackpot right-wing conspiracy theories are starting to erupt faster than they can be recorded. And the common theme among them is a frightening tale of some dastardly scheme devised by President Obama to rain misery on the American people who elected him twice.

"The latest plot uncovered by the intrepid reporters on Fox News is that Obama has a secret plan to import Ebola patients from West Africa into the United States where they will consume our scarce resources and infect our children. The plot was discovered by the Republican chairman of the House Judiciary Committee, Bob Goodlatte, who claims to have confidential information that came to him via an 'inside source' within the administration. Naturally he takes this skimpy, unverifiable gossip to Megyn Kelly of Fox News. He tells her that…


"There’s increasing evidence they’re making those plans. Members of the media, my office, have received confidential communications saying that those plans are being developed. [...] If you are concerned about this problem spreading – and this is a deadly disease that we’re even concerned about the great health care workers when they come back not spreading it – we certainly shouldn’t be bringing in the patients."

"The alarmist anxiety of Rep. Goodlatte is typical of the fear mongering that Republican politicians and pundits engage in so frequently. And as usual he has no on-record evidence of his allegations. This is just another unattributed assertion from a source whose credibility can’t be ascertained..."

Sometimes it's pretty hard to tell if the Conservatives are crazy... 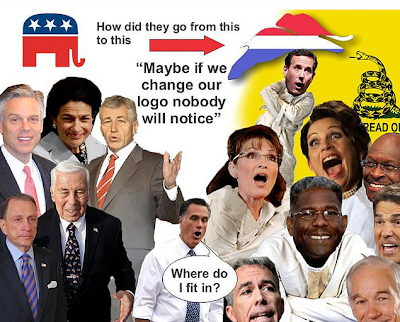 ...and sometimes it isn't hard at all!

"Conservative Columnist for WV Paper: Unarmed Teen Michael Brown Was an 'Animal' Who Needed to be 'Put Down.'"

"Don Surber, a columnist for Charleston, WV paper the Daily Mail, had some awful thoughts about Ferguson, Missouri in a now-deleted opinion piece on his personal blog.

"Surber, as conservatives are wont to do, chose the 'socially-acceptable n-word alternative,' the word 'thug,' to describe Michael Brown, who was gunned down in the street by Officer Darren Wilson. Falling in line with the right-wing mantra regarding black people, Surber explained that Wilson 'had to put this animal down.'

"'My initial reaction was Michael Brown deserved to die and I was right. His death was a justifiable homicide,' Surber added..."

Sometimes a little chuckle will hide the craziness behind a veil of stupidity, sometimes not...

And sometimes craziness comes to us in the form of Conservative racism... 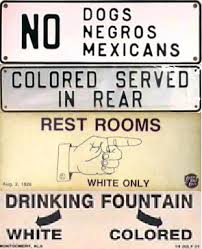 "Election officials in 27 states, most of them Republicans, have launched a program that threatens a massive purge of voters from the rolls. Millions, especially black, Hispanic and Asian-American voters, are threatened. Already, tens of thousands have been removed in at least one battleground state, and the numbers are expected to climb, according to a six-month-long, nationwide investigation by Al Jazeera America.

"At the heart of this voter-roll scrub is the Interstate Crosscheck program, which has generated a master list of nearly 7 million names. Officials says that these names represent legions of fraudsters who are not only registered but have actually voted in two or more states in the same election — a felony punishable by 2 to 10 years in prison.

"Until now, state elections officials have refused to turn over their Crosscheck lists, some on grounds that these voters are subject to criminal investigation. Now, for the first time, three states — Georgia, Virginia and Washington — have released their lists to Al Jazeera America, providing a total of just over 2 million names..."

So sometimes the psychopathic insanity gets mixed up with the Cons' War On Women - sometimes by Conservative women themselves...

Sometimes the crazy Conservative hatred even runs for decades and decades...

As the insanity marches on...

And if you think the Con job called "Benghazi" is insane, you got another think coming... The truth is that the Cons may be crazy, but their meanness and hatred trumps craziness all day long...

The truth is that the Cons aren't all crazy, and we can change an old saw slightly to say, "The Conservative movement is made up of a whole lot of crazy people, and a few sane ones." The problem is that the "sane" ones want to steal everything we have -- money, liberty, and our lives.

With a little less than a week before the Election, the Cons are favored to take over the Senate, capturing all three branches of governent, and you may remember the last time that happened under Bush 43.

Conservatism is the vanguard of the most greedy and wealthy among us, and that greed, coupled with the insanity of the typical Conservative follower, kills.

Maybe there oughta be a law.

"I wonder how many times you have to be hit on the head before you find out
who’s hitting you? It’s about time that the people of America realized what the
Republicans have been doing to them."