How Many Murders Do Conservatives Have On Their Bucket List?


The Iraq invasion, guns for all - no matter how many die, climate change from the spewing of toxins into our lungs from their boss's factories, miners killed because owners are too cheap to pay for their safety, the list goes on.

We all know how the Cons have killed their own people, that's easy.  But how many more of us do they plan on murdering in the continuing battles in their class warfare...their war against the poor and the middle class?

And do Conservatives kill us and inflict misery on their own people? Let's find out by taking a look at the future through the Conservative crystal ball...

"Guns and cars have long been among the leading causes of non-medical deaths in the U.S. By 2015, firearm fatalities will probably exceed traffic fatalities for the first time, based on data compiled by Bloomberg.

"While motor-vehicle deaths dropped 22 percent from 2005 to 2010, gun fatalities are rising again after a low point in 2000, according to the Atlanta-based Centers for Disease Control and Prevention. Shooting deaths in 2015 will probably rise to almost 33,000, and those related to autos will decline to about 32,000, based on the 10-year average trend..."

It's a good thing we can prosecute those guys who kill their wives and kids...except in South Carolina:

"South Carolina is one of more than 20 states that has passed an expansive Stand Your Ground law authorizing individuals to use deadly force in self-defense. The law has been used to protect a man who killed an innocent bystander while pointing his gun at several teens he called 'women thugs.' But prosecutors in Charleston are drawing the line at domestic violence.

"In the cases of women who claim they feared for their lives when confronted with violent intimate abusers, prosecutors say the Stand Your Ground law shouldn’t apply.

"'(The Legislature’s) intent … was to provide law-abiding citizens greater protections from external threats in the form of intruders and attackers,' prosecutor Culver Kidd told the Post and Courier. 'We believe that applying the statute so that its reach into our homes and personal relationships is inconsistent with (its) wording and intent...'"

So far, Conservative-made murders are only in the tens of thousands, but these criminals keep trying for EVEN MORE...their built-in hate and greed demands it.

"The Smoking Ebola Gun: Rand Paul’s Senate Hold Is Why The Nation Has No Surgeon General."

"The Republican obstruction strategy of “stall and block” is coming back to haunt Republicans in many ways, not the least of which is the country’s realization that we have no Surgeon General as we face the Ebola crisis.

"But of course, politicians don’t like to take responsibility for their tactics, so the Republicans’ new talking point to get around taking responsibility for their obstruction of President Obama, his entire administration and indeed, our entire federal government, is that Senate Majority Leader Harry Reid (D-NV) could call for a vote any time to confirm the nomination for the Surgeon General.

"But that’s not true.

"Senator Rand Paul (R-KY) put a hold on the November 2013 nomination after the NRA objected to the nominee..."

To the Cons, the Ebola virus is tailor-made for the worst of their murderous impulses...

Oh, those Conservatives sure are a hoot...

And finally, there are a couple of reasons we have a hard time stopping that Conservative Cult of Death...

And here's the second reason - Conservatives lie through their teeth... 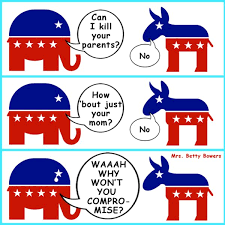 Murder, theft, and misery are right up the Conservatives alley, and the longer we keep them in office and in our faces the more of us they add to the lists of their victims.

Murder, theft, and the infliction of misery on innocents is the bailiwick of criminal cartels, and the American Conservatives make the mafioso hit men amateurs, just plain amateurs and greenhorns.