How Would YOU Like Living In The Brave New World of Conservatism? 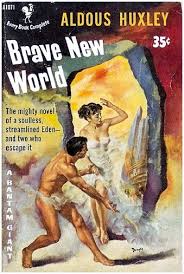 How bad can it get in the Brave New World of Conservatism?  Let's take a look at where we are first...

Sounds reasonable, but America is a "can do" nation and will be quick to take others' advice...

"Americans Have No Idea How Bad Inequality Really Is."

"And if they did, they wouldn’t want European-style solutions.

"If Michael Norton’s research is to be believed, Americans don’t have the faintest clue how severe economic inequality has become—and if they only knew, they’d be appalled.

"Consider the Harvard Business School professor’s new study examining public opinion about executive compensation, co-authored with the Chulalongkorn University in Bangkok’s Sorapop Kiatpongsan. In the 1960s, the typical corporate chieftain in the U.S. earned 20 times as much as the average employee. Today, depending on whose estimate you choose, he makes anywhere from 272 to 354 times as much. According to the AFL-CIO, the average CEO takes home more than $12 million, while the average worker makes about $34,000..."

Why don't Americans object, you ask?

"Monty Python’s John Cleese: FOX News People Are Too Stupid to Know They Are Stupid (Video)."

"In a Q&A video, Cleese said, “I think the problem with people like this is that they are so stupid that they have no idea how stupid they are.”

"'If you’re very, very stupid,' he says, 'How can you possibly realize that you’re very very stupid? You’d have to be relatively intelligent to realize how stupid you are.'

"He cited some research by David Dunning at Cornell. He says that Dunning has pointed out that knowing how good one is at something 'requires exactly the same skills as it does to be good at that thing in the first place.'

"'And this explains not just Hollywood,' Cleese concludes, 'But almost the entirety of FOX News.'"

Of course, getting radicalized will improve America's lot..

"Radicalized Right-Wing Activists Are Pledging Allegiance to a Dangerous Agenda
America, your religious extremists are already inside the 'Homeland,' so what are we going to about it?"

"The Islamic State has said, “Secular statists are destroying America,” and that “God is not finished with the U.S. yet.” When religious extremists make such proclamations we should take them at their word. Equally we should demand “moderate Muslim” voices to denounce such affronts to America’s secular values.

"The above paragraph is true except for one notable exception: the above proclamations are not attributed to Islamic extremism or the Islamic State. They’re respectively owned by the 2012 GOP nominee runner-up Rick Santorum, who provided the first quote, and potential 2016 GOP front-runner Ted Cruz, who gave the second - on day one of the 2014 Value Voters Summit.

"America, your religious extremists are already inside the 'Homeland,' so what are we going to about it?.."

But not to worry as long as the Press is around to help us...

(Excerpted from "Enlightenment 2.0: Restoring Sanity to Our Politics, Our Economy and Our Lives")

"All demagoguery all the time: Fox News and American politics' epidemic of craziness.

"An epidemic of craziness seems to have swept over the American political landscape. This is of course a problem not just for Americans, but for people all around the world. It remains the case that most people think of the United States as the world’s leading democracy. Although they may not choose to imitate many of the specific features of American democratic institutions, the prestige of democracy around the world is very much tied up with the performance of the American system. When this political system proves demonstrably  incapable of keeping charlatans, conspiracy theorists, and religious fanatics out of political power, this is a huge blow to the prestige of democratic systems as a whole..."

Well, if the Press can't help us our politicians can!

And if they can't do the job, our youth will step up to the plate...the sensible ones, that is.

Thus, we usher in the Brave New World of Conservatism, just not in the way Huxley envisioned it.

What can stop a vast criminal cartel with unlimited money and a constituency right out of Deliverance?

Who can stop them with the odds so overwhelming against the rest of the world?

Maybe a small change in our laws protecting these law-breakers - that would be nice...

(Nevada GOP Assemblyman Jim Wheeler, when asked if he would vote to reinstate
slavery if his constituents wanted it, 2013.)