Aren't Republicans And Democrats The Same?

Is this chart correct?

When Emerson said that,"All conservatives are such from personal defects. They have been effeminated by position or nature, born halt and blind, through luxury of their parents, and can only, like invalids, act on the defensive," he may have been exaggerating a bit, not knowing that liberal and Conservatives are cut from the same bolt of cloth...

Our current president is just the same as the one before him...

Heck, what IS the difference between Obama and Reagan?

Well, maybe the Liberals are just a LITTLE bit different...

"Exposing the Horrifying Truth About Liberals."

"I give in, conservatives have beaten me. They’ve finally convinced me the horrors that might come from a nation ruled by liberal ideology. And let me tell you, it would be a nightmare. Could you imagine if the United States was a country where we had universal health care and millions of people weren’t saddled with thousands of dollars in medical bills they can’t afford? It would be awful. Even worse, imagine if all of our electricity came from sun or wind energy? You know how terrible it would be to no longer have to pay for expensive electricity? I don’t know about all of you, but I love paying high electric bills....See more at: http://www.forwardprogressives.com/exposing-horrifying-truth-liberals/#sthash.bNWV5ELt.dpuf

Although some would say a LOT different... 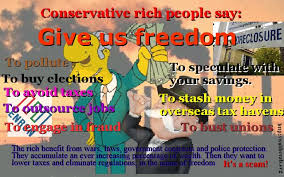 They may be idiots, but Conservatives have PRINCIPLES...

"The New Hampshire Republican Party toughened its stance on abortion over the weekend, adding support for fetal "personhood" rights into its official party platform.

"The party adopted new language at its annual convention on Saturday that pledges to 'support pre-born child’s fundamental right to life and personhood under the Fourteenth Amendment, and implement all Constitutional and legal protections,' according to the New Hampshire Journal. The state GOP platform had already included a general line of support for 'the unborn child’s fundamental right to life and implement all possible legal protections.'

"Fetal personhood measures, which have been defeated in several states, would grant legal rights to zygotes from the moment of fertilization. The measures are extremely controversial because they would criminalize abortion without exceptions and could ban some forms of contraception and in vitro fertilization..."

And with principles come CONVICTIONS...

"Cuts to Head Start and the Supplemental Nutrition Assistance Program have taken food away from schoolchildren. The cuts are directly related to the dramatic dropoff in federal corporate tax revenue.

"Tax avoidance is just as bad at the state level, which is a much greater source of K-12 educational funding. Both individuals and corporations are paying less state taxes than ever before. As a result, our public schools, the most important expression of a society working together to secure future generations, are being defunded and dismantled and left to decay.

"It may be the ugliest extreme of inequality in our country -- tax avoidance by the rich vs. broken-down schools..."

Not to worry, when it comes down to basics there's no difference between the Cons and the Libs at all...

We hear the refrain that there's no difference between the Parties until nausea overcomes us.  It's funny how we never hear that trite piece of propaganda from the left side of the aisle.  It's always from the right, whether they label themselves Republican, Libertarian, or Conservative.

There is really no difference between Conservatives, neoCons, paleoCons, social Conservatives, they're all the same: Follow The Money and it will lead you to the pockets of the wealthiest and greediest among us.

When Conservatism is abolished, the difference between Liberals will be stark: Feminists, minority groups of every stripe and color, labor Liberals, environmental Liberals, ad infinitum.

Maybe we SHOULD pass a law...

"A conservative is a man who is too cowardly to fight and too fat to run."