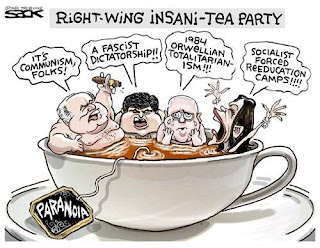 "A GOP Congressional candidate in North Carolina really wants to go to war with Mexico. In a June 26 video posted by the Daily Kos, Mark Walker was asked about the possibility of “using the military to secure our southern border.”

"He told the Rockingham County Tea Party group that 'If you have foreigners who are sneaking in with drug cartels, to me that is a national threat,' adding, 'And if we got to go laser or blitz somebody with a couple of fighter jets for a little while to make our point, I don’t have a problem with that either. So yeah, whatever you need to do.'

"'I hope you wouldn’t have any qualms about starting up a little war with Mexico,' the moderator responded.

"'Well, we did it before, if we need to do it again,' Walker, who is running in North Carolina’s 6th Congressional district, said. 'I don’t have a qualm about it...'"

Then there's the Con in Kentucky that hasn't heard about the separation between church and state...

"When the end of the world comes, I want to be in Kentucky, because everything there happens 20 years after it happens anywhere else." —Mark Twain.

"I’ve often heard from religious people that it is unfair to question or ridicule their beliefs, as if there is something taboo involved in an adult conversation about infantile superstitions rooted in religion. If such beliefs were rooted in sanity or truth, then they would withstand the force of truth or basic facts.

"The real question that I can never get a cogent answer to is: How much longer must we coddle the juvenile stupidity contained in the book of fiction called Genesis as if it were true?

"Gov. Steve Beshear recently presented his budget to the general assembly with a proposed $286 million in cuts — 6.4 percent in higher education and $50 million in K-12. Buried in the proposed budget is a $43 million tax break and an $11 million allotment for a lane improvement especially for the Ken Ham  Creationism Museum’s 'Ark Encounter...'"

One of the differences between Conservative and Progressive politicians is in the area of prevarication and plagiarism ("lying," for you functionally illiterate Cons.), as we see from a Conservative candidate for state Senate...

"An Oregon GOP Senate candidate is in full damage control mode after BuzzFeed published reports detailing examples of plagiarized material on the her website.

"One report focused on Republican Monica Wehby’s economic plan, which appears to be plagiarized from several sources. According to BuzzFeed, one section is copied verbatim from Republican Senator Rob Portman’s plan — released a month before Wehby’s..."

Then we have another GOP candidate, this time for the U.S. Senate, preaching the Conservative version of brotherhood, you know -- a Compassionate Conservative...

"US Senate candidate uses campaign to spread slogan: 'With Jews We Lose.'"

"A write-in candidate for the US Kentucky Senate is bringing his controversial message to voters.

"Robert Ransdell said he knows he cannot win against Republican Mitch McConnell or Democrat Alison Lundergan Grimes but wants to use the campaign to spread his slogan, 'With Jews We Lose.'

But you have to hand it to the Cons when it comes to hard work tearing down our nation...

"After a Brutal EIGHT DAYS of Work, The GOP-Led House Adjourns Until November 12th!"

"(A)fter a bone-crushing eight days of work, House majority leader Kevin McCarthy (R-CA) has announced that effective today, school’s out for mid-terms. They’re returning to work on November 12th, one day after the elections. McCarthy himself washes his hands of the matter:


"Unfortunately, while our nation continues to face tremendous economic challenges, House and Senate Majority leaders decided to adjourn Congress early and leave town. This was an unfortunate change in schedule for the American people and small businesses across the country."

"My colleagues and I, including more than 40 Democrats, were ready to have a real debate and vote on making sure we have stable tax rates moving forward so that small business owners can plan for the future. However, Congress departed without passing legislation to extend our current tax code and prevent massive tax hikes that arec oming January 1, 2011. Congress also failed to consider a real budget for Fiscal Year 2011."

"For the most part, McCarthy pins the blame on Democrats, who universally shut down the GOP’s 97th attempt to defund Obamacare, and other legislation to approving slapping orphans in their stupid faces until money falls out. McCarthy’s announcement suggests that they may return to session if the Senate refuses to pass the House-approved budget..."

Although they COULD have stayed an extra day or two... There are huge differences between the average Conservative and his hapless Sheeplets.

Some of the differences used to center around I.Q. -- until the advent of the Teabaggers, when the inmates took over the GOP asylum.

The Conservatives of yesteryear had the same values as today's Cons -- a belief that the rich should rule -- but they knew how to lie to protect their jobs back then, another difference between the Cons and other politicians.

Today's Cons tell us what they really think...and that may prove their undoing at the polls unless they can fix the machines or unless the SCOTUS comes to their rescue once again.

If we criminalize Conservatism before that happens, we'll avoid the misery and deaths that Conservative politicians love to inflict upon us to save their wealthy benefactors' income and assets.

"When the President does it, that means that it's not illegal."