What DO Conservatives "Believe" In?

We know that the underlying belief, the value that is at the core of Conservatism is greed and a hunger for absolute power by the upper class. As John Kenneth Galbraith noted, "The modern conservative is engaged in one of man's oldest exercises in moral philosophy; that is, the search for a superior moral justification for selfishness."

But what else do the Cons believe?  Well, there's race relations for a start...

"9 of the Most Despicably Racist Anti-Obama Bumper Sticker-Covered Vehicles (Images)."

Then there's guns and women...

And then there's man-made climate change, which isn't true of course unless you're a commie pinko red...

"NASA Reports August 2014 Hottest Since They Began Keeping Records Over 100 Years Ago."

"On Monday, NASA released a new climate report which found that globally, August was the warmest on record since records began being kept 134 years ago.

"The climate deniers will point to the relatively cool August experienced in this country as evidence that there is no warming, but that ignores the global picture.
Another reason is the fact that as the average annual temperatures have risen over an extended period, we have gradually become accustomed to the new normal..."

Did we mention the issues surrounding guns and women? (Go to the site below to watch the NRA ad.)

"How the NRA Degrades and Objectifies Women."

"Recently the National Rifle Association has aimed to boost its appeal among women. Last year it launched its "new and improved" NRA Women's TV Network, and it has hired several accomplished female gun enthusiasts as official NRA News commentators. Women were a focus at its annual meeting in April, and next month the NRA will host a Women's Leadership Forum Executive Summit, which promises to 'celebrate the role of women as powerful leaders.'

"But for women who oppose the NRA, it's a different story..."

Even though the GOP is in the hands of the NRA, Conservative pols will take care of their wimmen folk...

"If Republicans really wanted to show women that they care about them ahead of the election in November, they failed miserably.

"On Monday, Senate Republicans unanimously rejected the Paycheck Fairness Act, which would help narrow the pay gap between male and female workers. Women currently make 77 cents for every dollar a man makes..."

Now you know what Conservatives believe in.  Thank you very much, but after this I believe I'll have another drink. 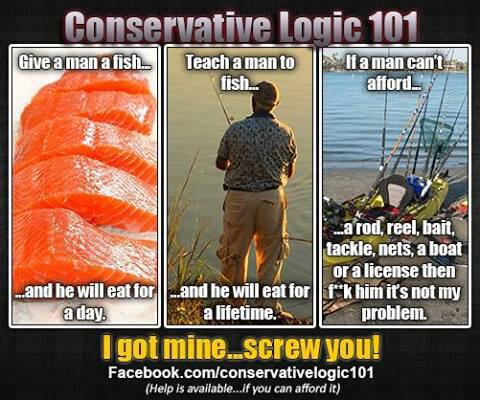 Our tongues were slightly embedded in cheek when we came up with this piece, because Conservative don't have many bona fide "beliefs." just one...

Conservatives believe in the rule over the 98 percent by the greediest and wealthiest among us and every other belief the Cons espouse is nothing but smoke, smoke and mirrors to attract the intellectually challenged among us.

Everything they say is a lie, and if you want to know what Conservatism is all about just "follow the money."

"The Republicans believe in the minimum wage — the more the minimum, the better."