The Conservative Generation of Swine

Ted Kennedy defined the Conservatives in America, saying, "The Republicans are looking after the financial interests of the wealthiest individuals in this country."

The Conservatives are the Generation of Swine that the great journalist and satirist Hunter S. Thompson wrote about, "where thieves and pimps run free."

Our essays are usually not planned, we decide on the spur of the moment to post topics or themes based on the news of the day...such as this gem from Jan Brewer, a sow in the Generation of Swine...

We start with a definitin of  "swine."

1. A pig.
2. A person regarded by the speaker with contempt and disgust, as in: "What an arrogant, unfeeling swine!"

We then find a current news article, such as...

"An August, 2012 executive order issued by Arizona governor Jan Brewer denying public benefits like drivers' licenses to young immigrants who have work permits has been struck down by an appeals court..."

Another Conservative pig has decided that there's another reason to kick out refugees from the most murderous countries on Earth, conveniently forgetting a certain plea from a Nation of Immigrants: "Give me your tired, your poor, Your huddled masses yearning to breathe free, The wretched refuse of your teeming shore..." 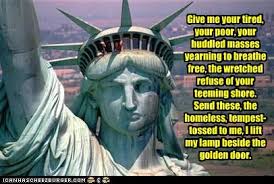 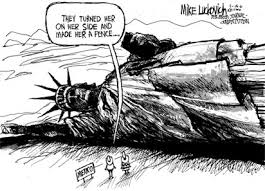 "Speaking with Newsmax host Steve Malzberg yesterday about the influx of Central American children and families at the Southern border, Rep. Louie Gohmert implied that President Obama was orchestrating the crisis in order to recruit millions of people to cast fraudulent ballots for Democrats and seize Texas from Republican control.

"'In the end, they have said that they want to turn Texas blue, they want to turn America blue,' he said. 'And if you bring in hundreds of thousands or millions of people and give them the ability to vote and tell them — as Quico Canseco said, he had illegals in his district that were told, "If you want to keep getting the benefits, you have to vote, and President Obama’s lawyers are not going to allow them to ask for an ID, so go vote or you’re going to lose the benefits you’re getting now." That drives people to vote and it will ensure that Republicans don’t ever get elected again.'"

"The Texas Republican also told Malzberg that the Central American refugees, combined with the end of the gold standard during the Nixon administration, will bankrupt the country."
In case you weren't looking, here is Thompson's 21st Century version of the Generation of Swine, and we're sure that Conservative oinkster Louie Gomer would approve...

Our Generation of Swine has brought us more than a few Conservative hogs and sows, but Miss Two-and-a-half-term Governor Palin has had too much to eat at the Conservative trough... "The 'Quitta From Wasilla' is making headlines again by displaying symptoms of acute Obama Derangement Syndrome. Sarah Palin, the 2008 GOP nominee for Vice-President, who was soundly rejected by American voters, is now calling for the impeachment of President Obama (again), who was elected twice with significant majorities.

"Palin’s panicky challenge to the Psycho Chicken Littles she commands from the parapets of her Facebook page cites the standard menu of wingnut atrocities that Tea Party dimwits cling to so fiercely (i.e. fundamental transformation, American exceptionalism, etc.). What her unhinged freak-out failed to provide were any actual legal justifications for impeachment. You know…high crimes, misdemeanors, jaywalking, anything remotely deserving of removal from office. With a completely empty basket of goodies, Palin launched her tirade saying that …

"Enough is enough of the years of abuse from this president. His unsecured border crisis is the last straw that makes the battered wife say, 'no mas.'"

1. A pig.
2. A person regarded by the speaker with contempt and disgust, as in: "What an arrogant, unfeeling swine!"

Swine are butchered, cut up into pieces, then sold for food. but this might prove to be too expensive and messy.  Since democracy demands that we somehow eliminate our Generation of Swine, we recommend instead...

...that we criminalize Conservatism. 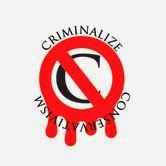 "Democrats work to help people who need help. That other party, they work for

people who don’t need help. That’s all there is to it."