Congresswoman Michele Bachmann's last days in Congress were sad ones for those who think stupid Conservatives are funny, and she didn't disappoint anyone when she gave her last speech before Congress...

"Michele Bachmann Gets Both Bible and Constitution Wrong in Her Final Speech."

"We saw Rick Perry misuse scripture the other day to justify Republican mistreatment of the poor. But a passing mention by Jesus in Mark 14:7 that 'For you have the poor with you always, and whenever you will you may do them good: but me you have not always' not make Jesus’ exaltation of the poor and condemnation of the rich magically go away.
We can debate whether or not Perry actually read the Bible or not, and if he did, whether he understood Jesus’ words, or whether he just flat out lied about what Jesus said. What matters is that whatever the reason, Perry has exposed himself as the fake Christian he is. You can’t follow Jesus if you don’t do what Jesus told you to do.

"Then there is Michele Bachmann (R-MN), going out with the same display of ignorance she showed when she come into the House by saying that the Speaker of the House is under the authority of Moses, something that comes up neither in the Bible nor in the Constitution. Moses of all people!


"Check it out. Seeing is believing: http://www.politicususa.com/2014/12/12/michele-bachmann-bible-constitution-wrong-speech.html...'

But you say you hadn't heard about that Moses quote?

"Michele Bachmann: God gave Moses the Ten Commandments so America would be rich."

"'And as I look about this chamber, we are ringed with the silhouettes of lawgivers throughout history,' Bachmann continued, referencing the 23 marble relief portraits in the House Chamber that were installed between 1949 and 1950.

"'And yet only one lawgiver has the distinction of not having a silhouette, but having the full face be revealed by the artist. That lawgiver is Moses. Moses is directly above the double doors that lead into the centermost part of this chamber, and in the face of Moses, his eyes look straight upon not only our nation’s motto, "In God We Trust," but Moses’ face looks full on into the face of the Speaker of the House. Daily, the Speaker of the House as he stands up in his authority and in his podium recognizes that he is a man under authority, just as Moses was a man under authority.'


"'Because you see, Mr. Speaker, Moses is given for the full honor of the greatest lawgiver in this chamber, because he was chosen by the God that we trust to be entrusted with the basis of all law. The "basis of all law" as was written by Blackstone, the famous English jurist, was the Ten Commandments, that were given by none other than the God we trust on Mount Sinai,' the congresswoman said..."

As Michele Bachmann gave her farewell speech to Congress, and thousands of political cartoonists all over the world cried and cried and cried, she didn't change her moronic ways...

"As a parting gift to comedians everywhere, Bachmann visited her pal Bill O’Reilly on Fox News (video below) to regale him with an account of her adventures at the White House Christmas party (which O’Reilly belittled as a “holiday” party). While bragging that attendance at the event was a high honor, she also complained about the less than respectful treatment she received from President Obama. The sad tale went something like this:


"I knew that this would be the last time that I would speak to the President as a member of Congress and I thought, I want to say something substant (sic) to him about what I think is the most consequential issue of the day. […]

"The president smiled, and he was fairly condescending and patronizing and said, ‘Well, it’s not quite that easy, Michele. But that’s okay,’ like I’m just, you know, an idiot and I don’t know anything."

"Had Obama intended to imply that Bachmann is an idiot it would have been entirely appropriate. She has proven it herself innumerable times. However, the President’s response was in no way disrespectful. It was pretty much all he could say under the circumstances. Bachmann confronted him with her comment in a photo line where many guests were waiting to greet the First Family. What did she expect him to do? Was he supposed to interrupt this photo-op to engage her in a protracted debate on a complex matter of national security standing there in the foyer? Perhaps she thought his eyes would light up with surprise and he would thank her for contributing such a brilliant idea that had never occurred to him. All things considered, Obama was rather polite after having been lobbied at a Christmas party to bomb another country..."

Bachmann has been accused of being crazy or stupid -- or both.  Let's take a look at a few of our favorite Bachmann quotes and YOU decide... 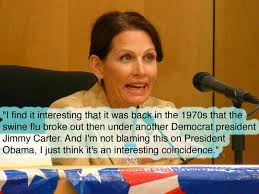 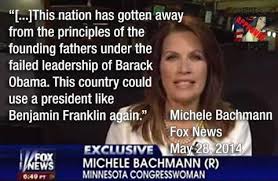 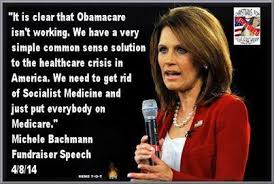 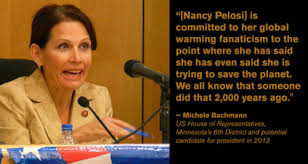 Pretty sad, eh?  But if you liked those quotes, here's over 30 more - with pix of our Little Princess...

1. "Gay marriage) is probably the biggest issue that will impact our state and our nation in the last, at least, thirty years. I am not understating that."

But the truth of the matter, this is who the real Bachmann is... 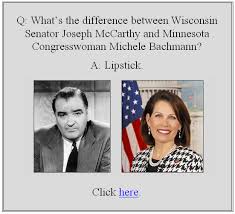 ...and if you think that the Conservatives don't have any more Bachmann's waiting in the wings, you're mistaken...

"Republicans Treat Their Voters Like Absolute Idiots – And Conservatives Eat it Right Up."

"It goes without saying that I watch a lot of news. Even though I’m not the biggest fan of the mainstream media, it’s still a source that can be used along with others to get some decent information. Though with each passing year the quality gets worse and worse – but that’s what happens when you allow your news to be driven by ratings instead of content.

"I have to admit, the 'news' channel that I watch the most is Fox News. Believe it or not, it’s a great channel from which to get information. Typically, whatever they’re saying, just believe the opposite. It’s also the best source for knowing what conservative voters will be saying next, because I can guarantee you whatever nonsense Fox News is pushing will soon be parroted by nearly every conservative from all across the country.

"Though I don’t really view Fox News as actual “news” – it’s right-wing entertainment. Their content isn’t driven by facts; instead it’s driven by what conservatives want to hear..." 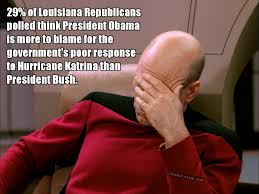 Stupid or crazy doesn't matter to the Conservative leadership because stupid and crazy is their base.

The Cons don't try to appeal to smart or sane people, because they already belong to the 47 percent.

But when those who seek political office in a participatory democracy try to appeal to the dumbest and nuttiest in our society, something is wrong - criminally wrong.

Let's Criminalize Conservatism before it's too late!  (Joyce, Jnr.)