There's Another Pestilence Infecting Us, And It's Called "Conservatism." In the background of the Ebola scare, another plague is infecting the polity...and it's called Conservatism.

First they infect each other, then they try to infect the rest of us...

"Greg Abbott is pallin’ around with terrorists. No, not Ted Nugent, another one. Border militia leader K.C. Massey, 48, briefly met the Texas gubernatorial candidate Greg Abbott four days before he was arrested on federal weapons charges. Don’t they look good together in the photo?

"Massey was charged last week with possession of a firearm by a convicted felon..."

There are real diseases, and there are Conservative diseases... 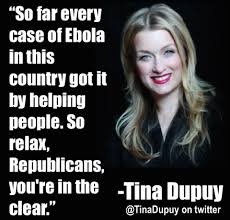 ...and the Conservative diseases are a thousand times more extreme.

"On Friday, the Grimes campaign filed for an immediate injunction with the state court in Franklin County, Kentucky..."

...and it takes all sorts of Conservative insects to spread them.

Some of the Cons think of themselves as quite religious...

...and others are secular enough to quarantine us when they think we're "sick."

The point is that we need to keep a sharp lookout for extremism, just like we have to look out for infections...

Because extremist diseases can infect everyone...

And when it comes to curing diseases, just like spreading them -- money talks...

But we have to isolate the Conservative disease, or we're all doomed.

Conservatives even found a way to attack President Obama For Fighting Ebola. Obama Derangement Syndrome Is Alive and Well.

The infection of our democracy by Conservatives has been around for quite awhile now, and it's time to apply some of our knowledge of their extremism to curing the disease called Conservatism.

When millions die, when tens of millions are robbed, and even more are thrust into misery, it's way past time to act.

"For me, the most disturbing aspect of the Republican political culture is how it
puts its unquenchable thirst for power, domination and a radical ideology above
facts, reason and the truth."