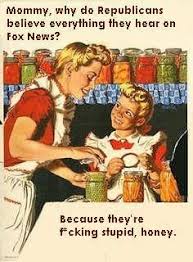 George Wills, a Conservative said, "“Conservatives define themselves in terms of what they oppose," but what do they really support and why don't they tell us?

Maybe a Democrat can help us: "The Republicans are looking after the financial interests of the wealthiest individuals in this country." ~Edward Kennedy.

We know the Cons are extreme, we know that they are radical, and we know Conservatism kills.

With the leaders it's all about the money, buy one of the more interesting (scientific!) studies discovered where racists and other Conservative followers come from - they come from the most stupid among us.

"An article published at Psychology Today by Goal Auzeen Saedi, Ph.D. of Millennial Media writes about the correlation between far right-wing conservatism, low intelligence and racism.

Saedi writes, "Hodson and Busseri (2012) found in a correlational study that lower intelligence in childhood is predictive of greater racism in adulthood, with this effect being mediated (partially explained) through conservative ideology. They also found poor abstract reasoning skills were related to homophobic attitudes which was mediated through authoritarianism and low levels of intergroup contact."

Click here for the rest of the story from Aatp.org --> http://aattp.org/multiple-scientific-studies-confirm-extreme-conservatism-linked-to-racism-and-low-i-q/

But let's take a quick look and see if we can get a handle on some of the "Conservative" ideals...

Maybe we can get a better idea of the Conservative ideals of two of Conservatism's heroes...

Oops, scratch that.  Let's take a look at one of their supporters in the Cons' war against the poor and middle class..

Finally, their ideals tell us a lot about their principles... 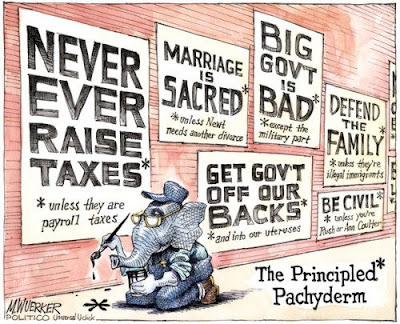 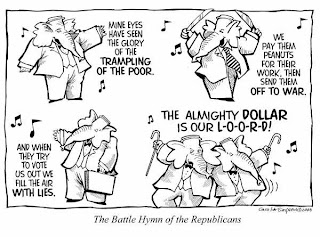 Reading between the lines, we'd have to say that the Cons have one ideal and just one principal concern: Billionaires and the corporations that shelter them.

Money makes the Conservative world go round and round, because Conservatism is all about the interests of the richest and greediest among us.

And the Republican Party is a front group for these wealthy parasites, who claim that they are "job creators."

There is only one cure for Conservatism -- ban it.