Conservatism's "Search For A Superior Moral Justification For Selfishness."


By now, many of us are familiar with the following quote from John Kenneth Galbraith, "The modern conservative is engaged in one of man's oldest exercises in moral philosophy; that is, the search for a superior moral justification for selfishness," and we've decided to take a look at some of the examples of their selfishness, because...

"Republicans Are The Ultimate Takers Who Only Want To Give To The Wealthy That They Serve." 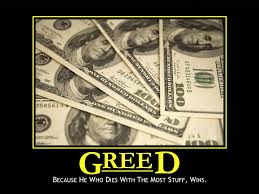 "There are several synonyms to describe the tendency, no habit, of Republicans’ idea of what it means to govern. Specifically, their habit of taking everything from the American people they can lay their grimy paws on. If Americans cannot recall, and it is likely their gross ignorance has taken what little memory they have left, that over the course of the past four years Republicans have attempted to seize, confiscate, rob, deprive, impound,  and snatch any and everything from the people. Regardless if it is their pensions, clean air and water, decent wages, healthcare, or religious freedom, Republicans have worked tirelessly to take everything from the people.

"Even if some Americans do grasp the concept of Republicans as the ultimate takers, they likely fail to comprehend that the GOP are ultimately monumental givers; it is that spirit of generosity that drives their habit of robbing the people. Of course, over the past two decades and  leading up to the present, Republicans have never had any intent to give anything to the people, but it is important for the population to understand that their only motivation for taking from the people, besides sheer hatred and contempt, is to give to the people they serve; the rich..."

The Cons have a long term plan that centers around their greed, corruption, and selfishness centered in trickle-down economics...

Some think they're just going to do nothing, as usual...

...especially where our health is concerned.

As well as childhood poverty...

...even though the Cons' rich masters aren't called the criminals that they really are.

But those guys are rich because we transferred all of our wealth from the middle class to the Billionaires' Club...

"The Billion Dollar a Month Club: A Runaway Transfer of Wealth to the Super-Rich."

"Our national wealth has grown by an astonishing $30 trillion since the recession, but most of it has gone to people who were already wealthy.

"We are living through a massive redistribution of America's net worth to the beneficiaries of a financial industry that has used cunning and money and power to impose their version of economic 'freedom' while deregulating any policies that might have stopped the incessant transfer of wealth.

"It's getting worse, by the year and by the month. President Obama's claim that 'We've recovered faster and come farther than almost any other advanced country on Earth' applies largely to the people whose wealth accumulation has dramatically pulled up the averages. The evidence is staring us in the face, but the super-rich are only watching their portfolios..."

And right out of the box after the Midterms, here is the Cons' first defense of their greed and the realization of their "search for a superior moral justification for selfishness..."

Because, even though the public has no idea what's going on there's a difference between the greedy pigs in the GOP and the Democrats... 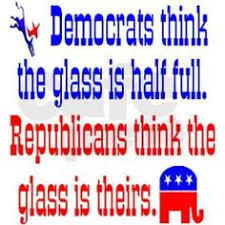 Yes, there really is a difference - and the difference is manifested in class warfare by the rich.  But the sad thing is that the public is completely unaware of it.  When six corporations control the media, things begin to look a little suspicious.

How many times have you seen any of the progressive posts in your local newspaper or local news? Never.

How many times has anyone heard the People complain of their lot?  Never, because that would presume that the media has let us know what Conservatism is really about.

And if they did know, they would want a stop to it immediately -- or they might even want to criminalize Conservatism.