Conservatism, Thy Name Is Hypocrisy


Benjamin Disraeli's quote at the bottom of this post, "A Conservative Government is an organized hypocrisy," is an unusual one -- Disraeli was a Conservative -- and about all that tells us is that it takes one to know another.

Hypocrisy is akin to lying, of course: "Hypocrisy is the claim or pretense of holding beliefs, feelings, standards, qualities, opinions, behaviors, virtues, motivations, or other characteristics that one does not in actual fact hold. It is the practice of engaging in the same behavior or activity for which one criticizes another..."

Americans dismiss any truisms about Conservative hypocrisy as just more noise from the opposition,

But is it noise, or do the Cons have to lie to conceal their underlying motives?

Let's take a look at what one of the leading Republican contenders for the presidency has to say about race relations in our country...

"Is He Joking? Rand Paul Claims Nobody 'Has Been A Bigger Defender of Minority Rights in the Congress Than Myself.'" 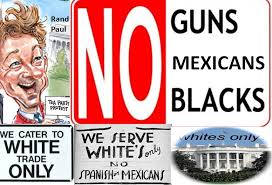 "Rand Paul is always good for a laugh, and his recent interview with Salon was no exception.  He said several things that would bring a smile to the face of a Beef Eater standing guard outside Buckingham Palace, but his response to a question about how he might attract minority voters given some of his past remarks would have had that guard holding his sides in laughter.

"'Well, I think that I simply point to my record. I don’t think there has been anybody who has been a bigger defender of minority rights in the Congress than myself,' the Senator said.

"This is the same man who was chosen by the Michigan Republican Party to speak at the launch of its new African-American Engagement Office in Detroit last December, where he spoke to a mostly white audience telling them that the opening of the office signified the “beginning of a new Republican Party..."

Was Paul always a champion of civil rights? If not, he MIGHT be a hypocrite and we doubt whether he is deluded...here's a story a little over four years old:

"Wednesday on 'Hardball,' Jack Conway charged that Rand Paul wanted to do away with the Civil Rights Act. In fact, Rand Paul's words to the Courier-Journal, in their editorial board interview, were even more extreme than the paper's editorial reveal.

"The interview that reveals Rand Paul's views on civil rights was done in April. People have linked to the editorial, but the transcript has not been circulated.

"Conway's charge today on 'Hardball' sent me searching. Below is a transcript (the piece below is at the very end of the interview):

"Question: Would you have voted for the Civil Rights Act of 1964?


"Rand Paul: I like the Civil Rights Act in the sense that it ended discrimination in all public domains and I'm all in favor of that.


"Rand Paul: (nervous laugh) You had to ask me the 'but.' um.. I don't like the idea of telling private business owners - I abhor racism - I think it's a bad business decision to ever exclude anybody from your restaurant. But at the same time I do believe in private ownership. But I think there should be absolutely no discrimination on anything that gets any public funding and that's most of what the Civil Rights Act was about to my mind...'" 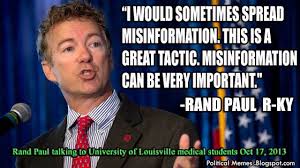 You ask if there are any more examples of Conservative hypocrisy, and we say there are too many examples...like this:

But we could go on like this for hours and hours, so here's a summary of Conservative hypocrisy in American politics... Hypocrisy is lying and no one does it better than your friendly neighborhood Conservative.

Some countries have outlawed the lying that the American Conservatives' house organ, Fox News, allows, but we are not one of them.

Outlawing Fox would be a start, but criminalizing Conservatism would be the frosting on the cake for the cause of democracy, wouldn't it?

Let's criminalize Conservatism, before it's too late!