When The Greedy Lead The Dumb, That's Conservatism!


There's an old saying that drives the Conservatives crazy, both the leaders AND their Sheeplets: "The Republican Party is made up of a few smart people and a whole lot of dumb ones."

This is the secret of Conservatism: The menace of evil creeping through our polity with the help of some of the most ignorant drones in the universe.

But let's take a look at some of the stories and memes of the day to see why -- because we should...

First, a typical Conservative conning his fans with the supreme con job)...

"LEAVENWORTH, Kan. (AP) — U.S. Sen. Pat Roberts is raising concerns that President Barack Obama may try to place terrorist suspects at a Kansas military prison — and is forcefully vowing to stop it — as he taps into the potential fears of voters during the closing days of a tight re-election campaign.

"The longtime Republican senator, who fought against moving Guantanamo Bay detainees to Fort Leavenworth in 2009, alleged during a rally Thursday in the Army base's home town that Obama wants to try anew to house suspected terrorists there. It marked a climax for a campaign theme that Roberts has been testing over the past several weeks as he tries to fend off a stiff challenge from independent candidate Greg Orman..."

As long as the Cons have idiots like these Mississippians brainwashed maroons, all is well... 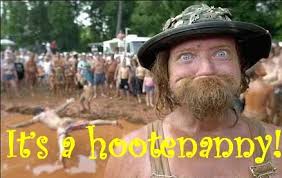 
One thing, he’s named ‘Obama'
This is America. Our president should be American. Not Muslim.

"Why they hate Obamacare even though they need healthcare:

"Why they don’t want the government to fix the economy:


It’ll take care of itself. You put God in the saddle, it’ll all be okay.

"Why they vote Republican even though it hasn’t worked for them:


But it COULD [work]. It hasn’t, but it could.
We would rather go broke and die hungry than to give up our moral beliefs.

This was one of their top conmen...

And these are the people who adored him and what might have happened if McCain won...

Then if the People hadn't suffered enough under Reagan, the Supreme Court put these guys in charge of one of the biggest con jobs of them all...

Every once in awhile, one of the Cons gets caught...

"If you recorded Maddow tonight, you saw this story. Republican candidate for Governor of Massachusetts Charlie Baker brought on the waterworks (tears) in a debate on Tuesday. It’s not really being questioned whether or not the tears were genuine. It doesn’t matter. Why is that? Because the entire story appears to have been a fabrication, or at the very best, a huge stretch. Massachusetts..."

And sometimes when the leader is as stupid as her followers, even she may have the smarts to keep quiet...

...but when it comes to pumping up their Sheeplets, they're pretty relentless with their cons.

The need for an ignorant base is typical of Conservatives all over the world...

So when the Cons crow about everything they've done for their people, try to find out just what they've done - just for fun... 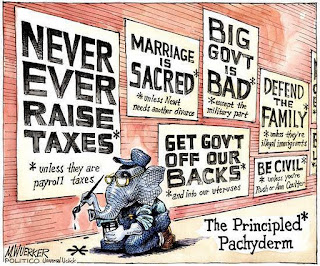 In a study done not too long ago, it was found that not only did the Conservatives score a below-average I.Q. of around 95 percent, the Liberals scored a lot higher with an I.Q. of 111.

And in another study it was found that ignorance and bigotry go hand in hand.

If ignorance and bigotry are the identifying marks of the typical Conservative Sheeplet, maybe we should pass a law before it's too late, and...

"Hypocrisy is a value that I think has been embraced by the Republican Party.
We get lectured by people all day long about moral values by people who have
their own moral shortcomings."