Welcome To The Disgusting World of The Compassionate Conservatives

When Conservative spokesman Grover Norquist said, "I don't want to abolish government. I simply want to reduce it to the size where I can drag it into the bathroom and drown it in the bathtub," he willingly exposed the Cons' primary objective to the nation-- the destruction of democracy in America.

How successful have the Cons been in their "primary objective?" Let's take a quick look at the results... "In a new examination of rising income disparity, the ratings agency Standard & Poor's says that current inequality levels are hindering U.S. economic growth, and the firm has cut its forecast accordingly.

"S&P looked at data from several major institutions, citing, for example, Congressional Budget Office figures on after-tax average income. For the top 1 percent of earners, that income rose 15.1 percent from 2009 to 2010; for the bottom 90 percent, income rose by less than 1 percent, 'and fell for many other income groups.' One of the primary, negative consequences of high income imbalances is that they lead to 'economic swings' and boom-and-bust cycles, a la the Great Recession, according to the report. But another big problem, to which S&P economists devoted much of the report, is the effect of inequality on educational achievement and, by extension, earnings potential..."

But how in the world do the Cons put their policies together in crisis situations?

Because Grover and his benefactors HATE Welfare Queens...

So Obama better stay out of the Cons' way when they're celebrating! 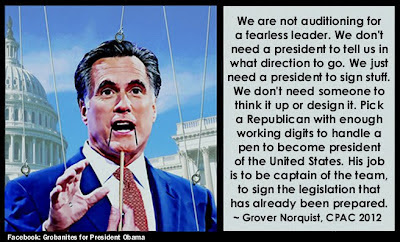 The Norquist quote should be taped to everyone's fridge, it's the journey that Conservatives want us to take as they lead us blindfolded down the path to a New American Feudalism.

Again: "I don't want to abolish government. I simply want to reduce it to the size where I can drag it into the bathroom and drown it in the bathtub."

The primary purpose of everything the Cons say and do is to drown us all in their fiscal bathtubs.

They don't care if they plunge us into a deadly worldwide depression since their wealthy benefactors will take care of them.

But as the middle class shrinks, then disappears, all will be lost unless we...

"I wonder how many times you have to be hit on the head before you find out who’s hitting
you? It’s about time that the people of America realized what the Republicans have been
doing to them."