A funny thing happened over at the Supreme Court the other day.  The same folks who brought you the judicial coup de etat in 2000 did it again...

"WASHINGTON (AP) — The Supreme Court said Saturday that Texas can use its controversial new voter identification law for the November election.

"A majority of the justices rejected an emergency request from the Justice Department and civil rights groups to prohibit the state from requiring voters to produce certain forms of photo identification in order to cast ballots. Three justices dissented.

"The law was struck down by a federal judge last week, but a federal appeals court had put that ruling on hold. The judge found that roughly 600,000 voters, many of them black or Latino, could be turned away at the polls because they lack acceptable identification. Early voting in Texas begins Monday..."

One of the non-party hacks who believe in democracy and that Americans have the right to vote disagreed... 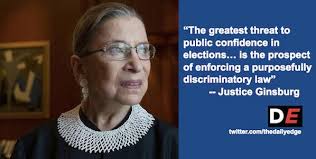 "Supreme Court Justice Ruth Bader Ginsburg issued a six-page dissent early Saturday morning, blasting the court's decision to allow Texas to use its new voter ID law in the November elections. She was joined in the dissent by Justices Elena Kagan and Sonia Sotomayor.

"'The greatest threat to public confidence in elections in this case is the prospect of enforcing a purposefully discriminatory law, one that likely imposes an unconstitutional poll tax and risks denying the right to vote to hundreds of thousands of eligible voters,' Ginsburg wrote.

"Ginsburg disputed the Fifth Circuit court of appeals' argument that it was too close to the November election to stop the law. Early voting begins on Monday in Texas..."

But don't be afraid, the Cons are really here to help you get over your fears and get out the vote...

"As the economy slowly rebounds, Republicans are doing everything they can to distract American voters.

"The GOP is scared its 2014 'wave' isn’t materializing, so it’s trying to scare voters. How? Pretty much with anything in the news cycle.

"By now the GOP was supposed to be well on its way to taking a solid Senate majority, along with another big chunk of the House. Things aren’t turning out that way: all the Senate races that were supposed to by settled by now instead remain neck and neck; the states the GOP was eyeing for expansion, like Minnesota, have turned back to the Democrats; and new vulnerable states like South Dakota and Kansas have opened up.

"To make matters worse, the standard bludgeons that the GOP used in 2010—namely spending and the economy—have been subsumed by progress. The unemployment rate has dipped below 6% in half the time Mitt Romney promised he would effect as president, while the deficit continues to plummet (actually faster than is good for the economy). Meanwhile Obamacare has been effectively neutralized as a campaign issue.

"This has left the GOP with nothing but fearmongering..."

But when all is said and done, our job creators appreciate how the benefits of democracy make them rich beyond all comprehension and hey are always ready to give something back to their country... "They're not satisfied to be breaking the law in North Carolina. Now they're aiming at Illinois.

"First it was North Carolina, now it's Illinois. Same pattern of voter suppression by fraudulent mailing, too.

"The Kochs' Americans for Prosperity must have decided they need to do some 'voter information' in what's an awfully tight race for governor in Illinois. According to the Daily Kos Elections Outlook, there's about a 4-point spread between Democratic incumbent Pat Quinn and Republican Bruce Rauner. Enter AFP to try to create a little chaos in the election. And like in North Carolina, where they sent hundreds of thousands of fraudulent mailers, they're upsetting people by sending mailers to their dead loved ones.

"DECATUR – It's not uncommon for residents such as Maryilynn Baer to receive political mail before the general election.

"But when recent letter came to her home that asked for her husband, Edgar, to re-register to vote before the November election, Baer was overwhelmed and upset.
"Her husband had been dead since May.

"'It was upsetting,' she said. 'His name had already been taken off the voter registration list, and I sent the letter to (Macon County Clerk) Steve Bean and told him I had already notified him that Edgar had passed away.'"


"See, the mailer made it seem like it had one from County Clerk Bean..."

At any rate, here is what the Cons think about elections and democracy and history and all that stuff...

...because they are really, really serious about helping their fellow Americans.

And the Cons know about economics and business, so how can we lose voting for them?

If the judicial coup de etat in 2000 that was Bush v. Gore didn't convince you that the Fascist Five in the SCOTUS were nothing but  Republican Party hacks, the Texas decision won't do it either.

Conservative Sheeplets love what their leadership and propagandists tell them to love, it's the Conservative way.  And when the Fascist Five corrupts the electoral process it's time to make a move.

We can impeach them or we can try to get our Congress to overrule their draconian decisions with something to help save democracy instead of corrupting it for a change.

Or we can criminalize Conservatism.  (I'll take criminalization...Joyce, Jnr.)

''Corporations are people, my friend... of course they are. Everything corporations earn
ultimately goes to the people. Where do you think it goes? Whose pockets? Whose
pockets? People's pockets. Human beings, my friend.''

GOP presidential candidate Mitt Romney to a heckler at the Iowa State Fair who
suggested that taxes should be raised on corporations to help balance the budget, 8/ll/11.