Many voters, especially the Low Information Voters, don't know who or what a Conservative is, so in the interest of fair play and a desire to educate the LIVs, here we go.

First, Conservatives hate America, with all that democracy and stuff...

Would you like to see a typical Conservative? Meet Josh... 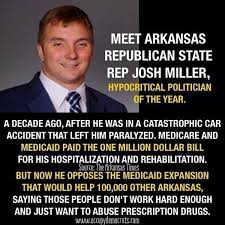 And to be fair, just like other minorities, women are sometimes Conservatives.  Meet Jodi...

"Joni Ernst, the Iowa Republican candidate for U.S. Senate, failed to disclose her ownership of an income-generating rental property on financial disclosure reports filed with the Senate.

"The reports fail to list Ernst's industrial property in Red Oak, Iowa, which had an assessed value last year of $54,830. The property generated at least $1,200 in income for Ernst in 2013, according to Ernst's campaign..."

And if Jodi had a talking pet, this is what the pet would say...

But behind that chatter, let's see if the Conservatives pass the Smell Test...

But those things don't matter to a Conservative, even when they kill their own people...

Because let's face it, the Cons CAN'T pass the Smell Test...

...especially when  they scream out their fears, hoping your fear turns to hate.  It's the Conservative Way.

We mentioned the Low Information Voter at the top of this post, and the best thing that the Democrats can do is to broadcast the failures of Conservatism to the LIVs over and over -- as well as their criminality, because the Cons fail the Smell Test.

Why does the LIV accept the fable that the Cons are astute businessmen after their leadership has driven us into recessions and depressions?

Why do they think that the Cons are against budget deficits?

Why don't they realize that Conservatism is the biggest con game in the  history of the world?

If they did, they'd rush to criminalize that vast criminal cartel called -- Conservatism.

"The Republicans are looking after the financial interests of the wealthiest individuals in
this country."