How Conservatives Have Shown Their Underlying Hatred of A Black President


Ever since Barack Obama was elected, we found out that racism isn't dead in America. It was just laying dormant until the Cons realized that they could come out of the Racist Closet and energize their supporters...

"Piers Morgan: Right-Wing Racists Are 'Enraged' By 'Notion of A Black Man Living At The White House."

"In a Friday column for the Daily Mail, Piers Morgan discussed the role race plays in America today with regard to various injustices. Morgan says that America has become more racist since President Obama was elected, but reminds everyone that race is not the root of every single injustice.

"Morgan cited specifically the case of an African-American handyman being stopped on suspicion of a robbery that never actually occurred at a house more than a mile away in a different neighborhood, solely because he was carrying some bags. 'These weren’t racist cops, they were just bad, lazy cops,' Morgan wrote...

Naturally, our media didn't put up with this vicious, ugly racism...

"Fundamentally dishonest, that's the Obama Administration to the folks at Fox News. Is that another code word for 'Black?' Does that go with feckless, lawless, illegitimate, un-American, welfare, food stamp and hip hop president (only to name a few)?

"Yes, fundamentally dishonest is code for the shifty negro in charge..."

Racists have no place in the Tea Party, and Fox News demands some proof that the Tea Baggers are racists...

"The Racists In The Tea Party Are No Longer 'Proud To Be A Teabagger.' "By facing head-on the inherent racism of the Tea Party (which is really just another faction within the GOP). Obama has embraced an observation that has been all too apparent to anyone paying attention, but often was left unsaid. Earlier this year News Corpse documented the overt racism infecting the right-wing after Fox News asked for some evidence of it..."

But if you're talking to a bunch of Conservatives, DON'T ask them this question...

Because when the Cons are ignoring this...

...this is what they REALLY believe. 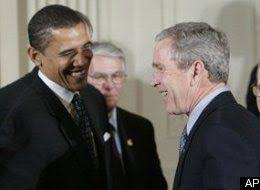 Conservatism's "secret bigotry" is not only no longer a secret anymore, now the Cons are PROUD to be called racists.

How did this happen when we thought racism was a thing of the past with Conservatives?  One of the most striking moments in the 2008 Election was a shot of Dubya watching the aftermath of the stunning Obama victory, looking happily on history being made...the only human moment of his eight years in office.

The next day the Cons went to work inciting the Racists-In-Hiding, and then they secretly pledged to hamper the new President in a conspiracy to block any efforts he might make to help his country.

Perhaps there oughta be a law...

"They’re 12 percent of the population. Who the hell cares?"