Conservatism : A Malignancy On The Face of Democracy

While our title might seem a little harsh, let's take a quick look at a few of the most revered Conservatives running for President now...first, Mr. Christie and someone who has his number stands up to the bullying Fat Man:

"Christie Heckler Does Not Want to 'Sit Down and Shut Up.'"

"Chris Christie may have met his match. The New Jersey governor went off on a persistent heckler Wednesday at an event commemorating the second anniversary of Hurricane Sandy in Belmar, New Jersey. His frustration mounting, Christie yelled at the man to 'sit down and shut up,' a line that received applause from many in the crowd. Moments later, Christie's security detail succeeded in confiscating the man’s television-camera-obscuring protest sign that read 'Get Sandy Families Back in Their Home / Finish the Job.'

"Sparring with vocal critics has become a regular part of Christie's job, but this time, the heckler, Jim Keady, isn't going away quietly.

"'He’s a bully,' Keady said of Christie in a phone interview hours after the confrontation. 'He tries to use his bullying routine to squash dissent.' It was a message that the suddenly-in-demand Keady was preparing to spread in separate interviews scheduled with network and cable news shows. 'I’m a 6-foot-4, 215-pound former pro-athlete. I’m not going to be bullied by him. And when he goes into his bullying routine, it lays bare the fact that he does not want to talk about the political realities that are being presented to him...'"

Do you really want a Hitler wanna-be bully boy to move into the White House?

If not and you like the "softer touch," there's this fan of "male-only" clubs...

"Lindsey Graham: White Men Will 'Do Great' Under My Presidency (AUDIO)."

"Lindsey Graham (R-SC) joked in a private meeting this month that white men would 'do great' under his presidency, according to audio obtained by CNN.

"The South Carolina Republican confirmed to the news outlet that he made the comment at a meeting of the Hibernian Society of Charleston, a charity organization that he said encourages speakers 'be earthy, to make fun of yourself, to make fun of them.'

"'I get to be president, white men who are in male-only clubs are going to do great in my presidency,' Graham says in one audio snippet as the audience laughs..."

...On Tuesday Limbaugh crowed to his listeners about the way President Obama is threatening 'five white women' in tough red-state Senate races.

"Here you have five white women seeking reelection, they desperately need the black turnout. We just had a story today that in New Orleans only 5% of the black vote’s voted in early vote for [Louisiana Sen.] Mary Landrieu…if that’s all they get then it’s sayonara. And yet here’s the first black president, Barack Hussein Obama, and none of these white women want him anywhere near their campaign.
"So how do we explain this?  The explanation is the guy is toxic and will cause others who might want to vote for these white women to stay home.  So they don’t want him anywhere near their campaign.  And he said, “I don’t care, I don’t blame ‘em.  They just gotta do what they gotta do to get elected.”  In the meantime, the irony is the first black president is an albatross around the necks of five white women who need the black vote because he will hurt."


And speaking of the pedophilia vote, we digress for a moment to look at yet another malignancy on the face of democracy... 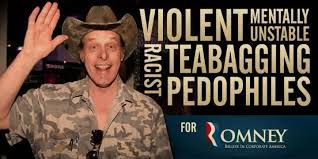 But if you have had enough of this... 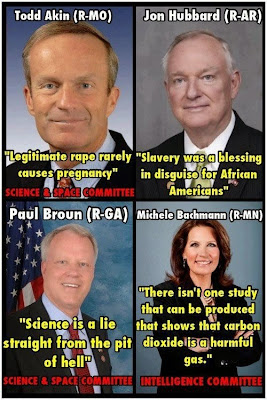 Before this happens (and they don't care if you know it), take a look at how the Cons suppress your vote...

(Click here for the rest of the sleaze --> http://truth-out.org/opinion/item/27112-unbelievable-gop-statements-on-voter-suppression.)

But if you DON'T vote in November, this is what you get... 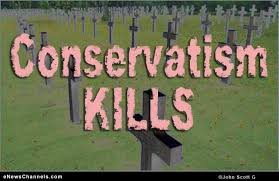 The American voter thought Reagan was suited for the White House, then stood by while he took countless lives, inflicted misery on the middle class, and wrecked the country to the best of his ability.

We also stood by when the Fascist Five in the Supreme Court committed a judicial coup de etat in 2000, enabling Dumbya to complete the job.

When are voters going to wake up and smell the Conservative cyanide?

Probably when it's too late...but a vote to criminalize Conservatism WOULD change all that.

"Come, come, my conservative friend, wipe the dew off your spectacles, and see
that the world is moving."