A Creepy Mix of The Conservative Brain And Imaginary Christian Persecution

Chris Mooney, the brilliant author of The Republican Brain, has a new article on Alternet.org, "How the Right-Wing Brain Works and What That Means for Progressives," that needs to be read in its entirety by those with normal brains and logical minds.

"There really is a science of conservative morality, and it is vastly different from liberal morality.

"...multiple studies associate conservatism with a greater disgust reflex or sensitivity. In one telling experiment, subjects who were asked to use a hand wipe before answering questions, or to answer them near a hand sanitizer, gave more politically conservative answers. (Jonathan) Haidt even told me in our interview that when someone like Rick Santorum talks about wanting to 'throw up,' that may indeed signal a strong disgust sensitivity.

"More recently, Haidt and his colleagues added a sixth moral foundation: 'Liberty/oppression.' Liberals and conservatives alike care about being free from tyranny, from unjust exertions of power, but they seem to apply this impulse differently. Liberals use it (once again) to stand up for the poor, the weak; conservatives use it to support the 'don’t tread on me' fulminating against big government (and global government) of the Tea Party. This, incidentally, creates a key emotional bond between libertarians on the one hand, and religious conservatives on the other..."

Okay, we have a recipe for impaired reasoning, now we just throw in a dash of some imaginary enemies... 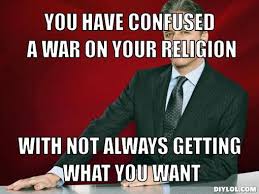 "A new Pew poll reveals the extent of their complex. Its origins can be traced all the way back to the Bible.

"Christianity, born in the harsh desert cultures of the Middle East, got its start by defining itself in opposition to both Judaism and the surrounding pagan religions of the Roman empire. Consequently, from the get-go teachings emerged that helped believers deal with the inevitable conflict by both predicting and glorifying suffering at the hands of outsiders. Indeed, persecution was framed as making believers more righteous, more like their suffering savior. Long before the Catholic Church made saints out of martyrs, a myriad of texts encouraged believers to embrace suffering or persecution, or even to bring it on.

"This sample from a much longer list of New Testament verses about persecution (over 100), gives a sense of how endemic persecution is to the biblical world view.

Get rid of your old recipe books...

Ask the cook to help you put it all together...

Mix it all the ingredients...

And now you've got something extra-special for Conservatives everywhere!

Sure we had our tongue inserted firmly in cheek when we posted this, but it isn't all that funny.

We've let the rightwing leaders, their propagandists, and their Conservative Christians take us down the path to a Third World Country status with very few objections from the media, and the truly amusing thing is that the Cons can't help themselves -- all that viciousness and vapid stupidity is hard-wired in their little brains.

If we can't cure insanity and stupidity anymore because frontal lobotomies are passe, our only course is to criminalize Conservatism.

"A good many things creep around in the dark besides Santa Claus."