Conservatism Thy Name Is Hypocrisy

Nowhere else in politics does hypocrisy pop up so often.  Conservatives have to lie and they have to be full-blown hypocrites if they are going to survive in a participatory democracy where the middle and lower classes can vote them out.

Conservatives depend on rightwing evangelical support and the hypocrisy rings out loud and clear...

"Alabama Official Proposes Ten Commandments Display, Says It 'Has Nothing To Do With Religion'."


"In an effort to educate the public on the divine origins of America's founding documents, Jackson County Commissioner Tim Guffey (R) has proposed erecting a Ten Commandments monument, as well as displays of the U.S. Constitution and the Declaration of Independence, outside the county courthouse.

"'If you look at the documents that was written -- the Constitution, the Declaration of Independence -- they are all stemmed from the word of God, from the Ten Commandments,' Guffey, who proposed the projects at a recent commission meeting, told WHNT on Thursday.


"The commissioner insisted that the Ten Commandments proposal is 'not for any type of religion' and would only serve to 'make people go back and study' the sacred history behind the country's founding documents...'"

Then we have the best and brightest Conservatives who are going for the Big Prize...Oopsie!

Not that we're laughing or anything...

Because running for president is a serious thing, isn't it?

Anyway, Perry is an isolated exception...

Because once you lie you always remember the lie...

"It has been quite amusing to watch right-wing activists label President Obama a pawn of both Iran and Saudi Arabia, even though the governments of the two countries are longtime regional rivals, while also being a sympathizer (or follower) of the Muslim Brotherhood, which is despised by the Saudis and the Iranian-aligned Assad regime of Syria.

"So how could Obama somehow be a pawn of all of these groups despite their very different interests, rivalries, and goals?

"Let right-wing activist Clare Lopez explain — or at least try to explain — in a WorldNetDaily interview yesterday about how it all makes sense..."

Then there's the one about their economic guru who just hates taxing the rich...

"Washington (CNN) -- Senate Republicans on Thursday blocked the No.1 item on the president's congressional '-do-list,' refusing to allow a vote on a bill that would give tax breaks for companies that
'insource' jobs to the U.S. from overseas while eliminating tax deductions for companies that move jobs abroad.

"In voting against the bill, Republicans raised both substantive and procedural problems with the measure.
The bill fell four votes short of the 60 needed to bring it to debate, with 42 voting against it. Four GOP senators -- Scott Brown of Massachusetts, Susan Collins and Olympia Snowe of Maine and Dean Heller of Nevada -- voted in favor of the bill..."

And anyway, why would Fox News want to protect the rich? 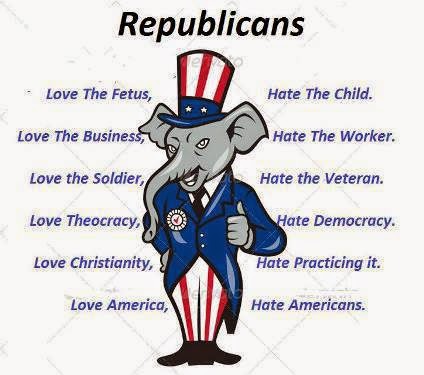 "Republicans don't like people to talk about depressions. You can hardly blame them for that. You remember the old saying: Don't talk about rope in the house where somebody has been hanged." -- Harry S. Truman.

And this is the biggest hypocrisy of them all, the two-faced claim that trickle-down economics helps the People, the "job creators'" myth.  Class warfare, anyone?

When Conservative hypocrisy leads to human misery, theft, murder, and even the threat of human extinction by pretending that man-made climate change is another myth, it's time to criminalize Conservatism...in fact, it's way past time. 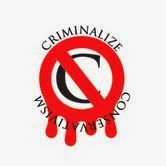 "As hypocrisy is said to be the highest compliment to virtue, the art of lying is the
strongest acknowledgment of the force of truth."