7 Vilest Right Wingers This Week: 'Waterboarding Is How We Baptise Terrorists' Edition 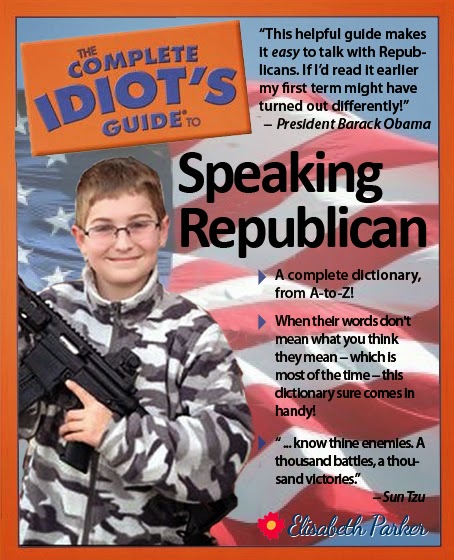 It's Monday and time for Janet Allon's weekly piece, this time with an article titled, "7 Vilest Right Wingers This Week: 'Waterboarding Is How We Baptise Terrorists' Edition," wherein "Sarah Palin offends her Christian allies for "her sacrilegious jibe" ... and more. 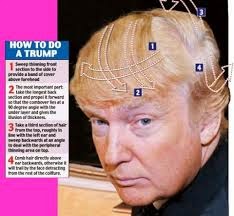 "There’s competition for the title 'The Donald,' with all the idiocy, egotism, racism and bad comb-overs the name implies.

"But rich, white jerks named Donald have to stick together. For one thing, they can protect each other from predatory girlfriends who blab their dirty little secrets to the world. That was pretty much Donald Trump’s take on Donald Sterling’s troubles this week. Sterling’s problem is not his documented history of racism, housing discrimination, deep-seated misogyny, and views of the world that are almost as incoherent as they are repugnant. Donald Sterling’s problem is that he has the 'girlfriend from hell.'

"You won’t catch Trump's trophies blabbing like that. Wife Melania thinks he’s right about everything. Marla Maples was gagged in the divorce, though when they were courting he did allow her to brag about his prowess in the sack.

"Of course, now V. Stiviano says she wasn't Sterling’s girlfriend. She has alternately described herself as his archivist, his personal assistant and his 'silly rabbit,' all jobs which came with a multi-million-dollar apartment and several luxury cars. The route which her infamous taped discussion with Sterling took to TMZ is mysterious. Why, she’s even saying the now banned-for-life Clippers owner is not really a racist, despite telling her not to bring black people to his games or be photographed with them. 'I think Mr. Sterling is from a different generation than I am. I think he was brought up to believe these things… segregation, whites and blacks,' she told Barbara Walters Friday night.

"How sweet. See Donald, she’s not so hellish after all.


"Sarah Palin is such a fun gal, with her bubbly personality, invented words like refudiateand her tenuous grasp of American history. (Remember children, Paul Revere warned the British.) She’s also an enthusiastic gunnie—she likes hunting moose and liberals—and a good Christian soldier, who thinks life begins at conception and ends whenever the hell she says it does. But Palin managed to offend some of her Christian allies last weekend speaking at the NRA convention, when she reminded everyone why we are so very lucky that she never got within a heartbeat of the presidency.

"Comparing how liberals view terrorists and how she views them, Palin told the appreciative crowd, 'Oh, you can't offend them, can't make them feel uncomfortable, not even a smidgen. Well, if I were in charge, they would know that waterboarding is how we baptize terrorists.'

"Oh ha ha ha, went the crowd. Who would have thought it, gun enthusiasts also being torture enthusiasts?

"A number of Christian leaders were slightly less enamored. Their problem was not so much the waterboarding thing, that’s fine. But invoking the sacrament of baptism? On terrorists!! Presumably Islamic ones! That is just wrong. Rod Dreher, writing for the American Conservative lamented: “Palin and all those who cheered her sacrilegious jibe ought to be ashamed of themselves. For us Christians, baptism is the entry into new life.” Waterboarding rarely is viewed that way.

"No shame appears to be forthcoming from the Palin camp.

"You might have thought Sean Hannity would be interested in rehabilitating his image somewhat after he elevated rancher Cliven Bundy to hero-outlaw status only to be embarrassed and appalled when Bundy suggested blacks were better off as slaves.

"But no, Hannity found another vile cause to celebrate this week, and if he was trying to outdo his previous odiousness, we just might have to hand the victory to him.

"Hannity had only one problem with what Minnesota murderer Byron Smith did when he shot two kids who had broken into his house execution-style, after setting a trap for them and lying in wait with his guns. It wasn’t the third shot Smith fired into 17-year-old Nick Brady’s face after saying to the wounded teen, 'You’re dead.' And it wasn’t hunting down 18-year-old Haile Kifer, putting a gun to her chin and making her eat a bullet. It was the fact that he called the teenagers 'vermin.' Now that’s hurtful.

"The jury convicted Smith of premeditated first-degree murder this week, but the court of Hannity was considerably more lenient. Hannity’s not just a stand-your-ground advocate. He’s a 'set-traps-in-your-ground, lie-in-wait-in-your-ground, and hunt-down-and-execute-anyone-on-your-ground' kind of guy. On his show, he questioned the verdict because the teens 'broke into the guy’s house.'

"Hannity, you are a seriously angry, possibly psychotic man. At some point this stuff you spout eats into your psyche. We’re hard-pressed to find a joke about this. Just stop.

"Radio host Glenn Beck makes no secret of his distaste for Hillary Clinton. Another thing he dislikes: gay marriage.

"Beck is not sure that Hillary is a lesbian, but he is sure she would be willing to say she is a lesbian if it helps her get elected. Of course, she would. This is a woman who had her daughter knocked up in order to be a grandmother while she is running for president. Hillary stops at nothing. Having shoes thrown at her. Doing whatever it is she is supposed to have done in Benghazi. Faking an aneurysm.

"But the target here was gay marriage and all the politicians who opportunistically jumped on board to support it, all because of what Beck and his sidekicks scoffingly called “the arc of history.”

"One of Beck’s sidekicks gave him an opening he just had to drive through when he mentioned that Hillary Clinton came out in favor of gay marriage last year.

"'Did you just say, came out?' Beck asked with a little glint in his eye.

"'I'm telling you,' Beck said, 'Hillary Clinton will be having sex with a woman on the White House desk if it becomes popular.'

"They all laughed and laughed, imagining that very scene.

"5. Denver radio host: 'All racists are, at the end of the day, atheists.'

"Dan Caplis, a talk radio host in Denver weighed in on the Donald Sterling controversy earlier in the week asserting his perverse opinion that all racists are atheists.


"'Nobody who believes in God can be a racist, in my view, because once you believe God made us, you mean, God made junk? God made somebody lesser just by virtue of the color of their skin? So my starting point is always: All racists must be atheists. They can’t possibly believe in God.'

"It made perfect sense to him, and he stuck to it even as listeners barraged him with angry emails. But he did say that the opposite was not true, insisting that he does not believe all atheists are racist.

"Pretty big concession there for a man whose starting point is that all racists are atheists. Funny, we have a distinct memory of Cliven Bundy talking a lot about God as he wondered whether black people were better off as slaves. But he's not a racist. He said he wasn't. Of course, we could also name just about every other racist in history including those who put burning crosses on black people's lawns.

"Caplis grew up in Chicago, and he knew some racists there, and always assumed they could not believe in God.

"So, yeah, there’s some real social science behind his claim. He always just assumed it.

"6. Alabama’s chief justice: Buddha and Mohammed did not create us so First Amendment only applies to Christians.

"It’s a free country, so not against the law to be some kind of religious kook. But when you are the law, you’re supposed to, well, understand the law. No one told that to Chief Justice Roy Moore of the Alabama Supreme Court who declared at the Pastor for Life Luncheon this week that the First Amendment only applies to Christians because, 'Buddha didn’t create us, Mohammed didn’t create us, it was the God of the Holy Scriptures.'

"Hmmm, that doesn’t sound like what they teach in most law schools. 'They didn’t bring the Koran over on the pilgrim ship,' the judge continued. 'Let’s get real, let’s go back and learn our history. Let’s stop playing games.'

"Wait, which game are we playing? Not that silly old religious freedom game, or that ridiculous separation of church and state game. No, we’re playing the game of Life, which, incidentally, begins at conception, not when you’re born, not at 30. Conception. That is definitely what Thomas Jefferson meant by 'life.'

"Judge Moore just knows that. Don’t ask him how.

"An absolute charmer is running for Senate in South Dakota. She is a doctor, or has Dr. in front of her name, which is Annette Bosworth. She styles herself after Tea Partiers Sen. Ted Cruz and Rep. Steve King, and some of her employees are suing her for back pay. She also has a Facebook page, and posts her deep thoughts there. Like this one this week:


"'The food stamp program is administered by the U.S. Department of Agriculture. They proudly report that they distribute free meals and food stamps to over 46 million people on an annual basis.'

"No word on where she got the numbers, but moving on to the rest of her post.


"'Meanwhile, the National Park Service, run by the U.S. Department of the Interior, asks us ‘please do not feed the animals.’ Their stated reason for this policy being that… The animals will grow dependent on the handouts, and then they will never learn to take care of themselves.'

"This concludes today’s lesson. Any questions?

"Ummm, yeah. Are you aware that you are in the running for the most heinous person of the week?" "Vile," "absurd," "dastardly," "stupid," "appalling," "outrageous," and "psychotic" are words Ms. Allon has used to describe the quotes she has posted each week.

All of the adjectives are correct, and all neatly describe the words of two sorts of Conservatives: the criminals and the idiots, leading us to the familiar question -- who is worse, the person who speaks what's on his mind or the person who lies to attract the lowest common denominator in our society?  Who will spend more time in prison when Conservatism is made illegal -- Christine O'Donnell the twit, Annette Bosworth the fruitcake, or Sean Hannity the paid Conservative propagandist?