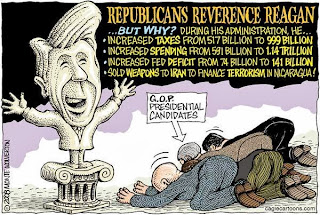 We have titled today's post, "Ronald Reagan: Toxic Criminal," taken from a great piece written by "Avila" at the Dailykos.com, "The 'Welfare Queen,' The 'Homeless By Choice': Reagan's Toxic Legacy."

The story exposes Reagan as the mean old man that he was, not the "hero" that Conservatives and their Sheeplets make him out to be:

"You remember the Welfare Queen, don't you? The welfare queen stereotype (circa 1976) is a picture that some whites still have in their heads about black women.

"The Welfare Queen lived very comfortably (after all, she had 35 different IDs and 35 monthly checks from welfare, plus child support), and raised her many children without a husband or partner. All of the children had different fathers. The pervasive stereotype was that black women are unwilling to work, unwilling to control our insatiable sexual appetites, and unwilling to better ourselves (because the world, or the federal government to be precise, owes us a living).

"As a young girl in New Orleans, I wanted to meet the Welfare Queen. She drove a pink Cadillac, and I'd heard much about her while my parents watched President Reagan on Jim Lehrer's News Hour. In my sometimes lonely, only child mindset, I daydreamed that the Welfare Queen would adopt me. I'd have lots of sisters and brothers to play with. I'd have all the dolls and toys I wanted, because the Welfare Queen made $150,000 a year without even working.

"Every day, I looked for The Welfare Queen and her pink Cadillac. I never found her, and eventually, I learned she didn't even exist. It's not hard to 'troll' a little kid, but how many Americans fell for Reagan's Audacious Act? Too many, until it was too late and he had been elected and re-elected.


"By then, though, President Reagan, the smiling, ostensibly lovable elderly man whom most adults I knew seemed to approve of, was a man who frightened me. Why? I knew nothing about government, politics or current events, but I knew Reagan wore a mask (maybe from his movie days), and he laughed and told jokes that even a child could recognize as vicious, cruel, and at the expense of others. Like this one:


"'People who are sleeping on the grates, the homeless . . . are homeless, you might say, by choice.” (National Housing Institute)'

"During Ronald Reagan’s two terms in the White House, the minimum wage was frozen at $3.35 an hour, while prices rose, thus eroding the standard of living of millions of low-wage workers. The number of people living beneath the federal poverty line rose from 26.1 million in 1979 to 32.7 million in 1988. Meanwhile, the rich got much richer. By the end of the decade, the richest 1 percent of Americans had 39 percent of the nation’s wealth. 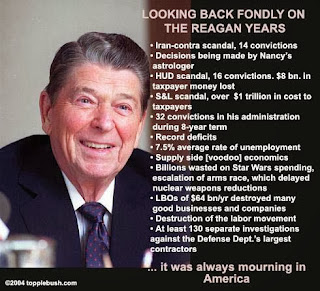 "In the 1980s, the proportion of the eligible poor who received federal housing subsidies declined. In 1970 there were 300,000 more low-cost rental units (6.5 million) than low-income renter households (6.2 million). By 1985 the number of low-cost units had fallen to 5.6 million, and the number of low-income renter households had grown to 8.9 million, a disparity of 3.3 million units.

"Another of Reagan’s enduring legacies is the steep increase in the number of homeless people, which by the late 1980s had swollen to 600,000 on any given night – and 1.2 million over the course of a year. Many were Vietnam veterans, children and laid-off workers.

"In early 1984 on Good Morning America, Reagan defended himself against charges of callousness toward the poor in a classic blaming-the-victim statement saying that 'the homeless . . . are homeless, you might say, by choice.' 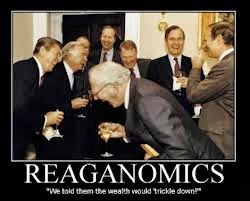 "Ronald 'The Great Communicator' Reagan convinced the masses that if they got the government out of the business of trying to enhance freedom, equality, and justice, life would be better. How much better?

"Ever the master of stagecraft, this carefully crafted 'knockout punch' during Candidate Reagan's debate with then President Jimmy Carter had the notorious (because no one remembers a word Carter said after) punch line: 'Are You Better Off Now Than You Were Four Years Ago?'

"The subliminal message to those who hated our revolution was that their lives would be better, as once they supposedly had been, when minorities were back in their place, and women were back in theirs, and former colonial empires could be controlled for the benefit of America's Gross National Product ('American Interest Abroad' was primitive code-switching for that hot mess of foreign policy, just as "states' rights" was the parlance for Reagan's openly racist contempt).

"Even now, as a grown-up with children of my own, my memories of Ronald Reagan are a bit unnerving. When reading about his legacy, it surprises me that progressives try to frame him in positive terms, citing his speeches about freedom.

"I think you know that rhetoric about an 'evil empire,' along with 'Mr. Gorbachev, tear down that wall!' was pure propaganda, an opportunistic whopper as lies go. Reagan's stubborn insistence that no word for 'freedom' existed in the Soviet language was also fabrication.

(Note: Mr. Gorbachev and Mr. Sarkarov most likely doubled up in laughter hearing Ronald take credit for the dismantling of the Soviet Union. - Joyce, Jnr.) 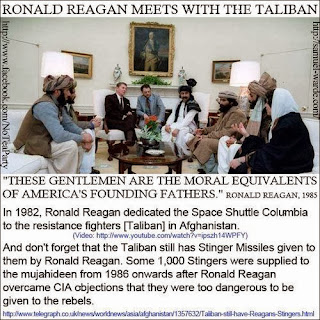 "The central tenet of the Reagan years is a celebration of the 'me' and an aversion to the 'we.' When Harris pollsters asked U.S. citizens aged 18 and older what it means to be an American the answers surprised no one. Nearly 60 percent used the word freedom. The second most common word was patriotism. Only 4 percent mentioned the word community.

"The late Christopher Hitchens described Reagan as cruel and stupid:


"'One could go on. I only saw him once up close, which happened to be when he got a question he didn't like. Was it true that his staff in the 1980 debates had stolen President Carter's briefing book? (They had.) The famously genial grin turned into a rictus of senile fury: I was looking at a cruel and stupid lizard.'

"His reply was that maybe his staff had, and maybe they hadn't, but what about the leak of the Pentagon Papers? Thus, a secret theft of presidential documents was equated with the public disclosure of needful information. This was a man never short of a cheap jibe or the sort of falsehood that would, however laughable, buy him some time. 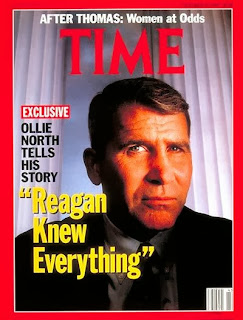 "Indeed, one could go on. What about the tens of thousands of mentally ill and mentally retarded individuals displaced coldly and cruelly into the street from state institutions when social programs were defunded under Ronald Reagan? (See: "States' Rights.") What about Iran Contra? What about the sheer trippy lunacy of the Strategic Defense Initiative, aka "Star Wars?"

"It was said that then First Lady Nancy Reagan consulted an astrologist to determine the timing of then President Reagan's every public move. Voodoo economics? No reading of tea leaves is or was needed to see the simple truth.

"Ronald Reagan, that jolly old bigot, created an 'investor class' by throwing the middle class into a death spiral of homelessness, joblessness, poverty, desperation and despair. Hey, if President Reagan could laugh at hobos and black women and poverty, why couldn't you? It was all good, unless, of course, you happened to be down and out in the brutal reality President Freakshow made with a twinkle in his eyes.

"This started as a comment, but I thought about it when I should have been sleeping last night. Just like old times, when I'd summon up the nerve to get the flashlight, tiptoe out of bed and peek underneath, and into my bedroom closet as a little girl, not afraid of voudon or witches, but of a monster who wore a mask and happened to be the President of The United States: Ronald Reagan. 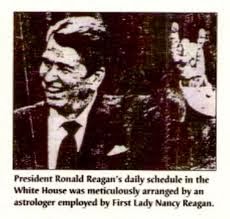 "He was then, as now, the smiling face of unimaginable bigotry, the sunny spokesman for greed and selfishness, the friendly game-show host handing out cruelty as a lovely parting gift, the chuckling ringmaster, summoning up the worse angels of our nature."

The "Great Communicator" was after all was said and done, like all Conservatives, a liar and a criminal - because he had to be.  And a sick, mean old man - because he just was.  And today's Conservatives worship his memory to the point of coporphilia.

Heading a panapoly of mentally deficient White House occupants like Dan Quayle and the Bush boys, Ronald's mental incapacity compared with Presidents like Carter, Clinton, and Obama are a stark contrast.

Iran-Contra, Star Wars, "The number of people living beneath the federal poverty line rose from 26.1 million in 1979 to 32.7 million in 1988...federal housing subsidies (decline)...the steep increase in the number of homeless people...'the homeless . . . are homeless, you might say, by choice'...tens of thousands of mentally ill and mentally retarded individuals displaced coldly and cruelly into the street from state institutions when social programs were defunded...he ignored AIDS for most of his time in office...throwing the middle class into a death spiral of homelessness, joblessness, poverty, desperation and despair..."

And all this on top of Jesse Jackson Jr's "bullet list."

The Great Communicator was indeed the Teflon President, and for many who rejoiced in kind of a schadenfreude that Nancy had to take care of his mindless carcass for so many years before his death ("Jane?  Is that you, Jane?").


The last paragraph in the piece says it all: "He was then, as now, the smiling face of unimaginable bigotry, the sunny spokesman for greed and selfishness, the friendly game-show host handing out cruelty as a lovely parting gift, the chuckling ringmaster, summoning up the worse angels of our nature."