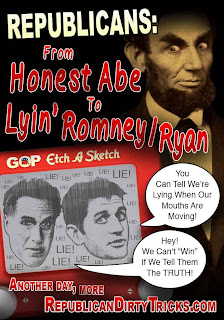 Republlicandirtytricks.com wrote a scathing piece on the Conservative Lying Machine called, "Republican Big Liars."  The article makes a case for the recent history of prevarication by the GOP, with the graphic entitled "Republicans: From Honest Abe To Lyin' Romney/Ryan," and provides the proof needed to pin the Republican Party down as the Party of Prevarication...Please click the links to find out the naked truth in more detail.

"What’s happened to the Republican Party? It has gone from the party of 'Honest Abe' Lincoln to a nest of greed-centered sociopaths, science-ing theocrats and ghosts of times best left in the dung heap of history. It’s a party that thrives on dividing the people, appealing to the worst aspects of the human condition to rot America from the inside for the sake of an ideology that is nothing short of an attempt turn America back into the same type of system of oligarchy our founders fought a revolution to escape.

"The fact is, since selling out to big-moneyed interests in the first Gilded Age, the Republican Party has not done a single thing to advance the interests of the working class. Quite the contrary, they have worked against the interests of the majority with the goal of turning the working class, once empowered by the New Deal (and too “uppity” for their liking), into the more malleable and compliant working poor. In 30 short years, Reagan’s trickle-down voodoo transformed America from a creditor to a debtor nation, stagnated wages, and turned her from the most to the least upwardly mobile with the widest income gap of all industrialized nations. A record like this is nothing to boast about – even Reagan’s own Budget Director, David Stockman, admits Republicans destroyed the economy. So Republicans simply lie, confident that the ignorance they’ve deliberately cultivated will deter the people from catching on. 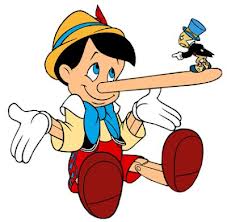 "When the lies are debunked and challenged… oh well! The lies are effective, so they’re sticking to them. After all, as Romney pollster, Neil Newhouse said, “We’re not going to let our campaign be dictated by fact-checkers.”

"Republicans can get away with their lies because they’ve constructed a media echo chamber – made possible by Bill Clinton’s signature on theTelecommunications act of 1996 (deregulating the media) – that has helped turned America into a nation where half it’s citizens never hear the truth, and if they do, they’re told they’re being lied to. It’s a propaganda perfect storm that allows Republicans to get away with framing their entire convention around an out-of-context quote manipulationand a bald-faced, race-baiting lie about Welfare. These lies made the perfect backdrop for Paul Ryan to stand in front of America, as Fox New’sSally Kohn wrote, 'attempt to set the world record for the greatest number of blatant lies and misrepresentations slipped into a single political speech.'

"'Although I rubbed my eyes when I read it, we have been told that it was not a Republican depression, but a Democratic depression from which this Nation was saved in 1933 – that this Administration this one today – is responsible for all the suffering and misery that the history books and the American people have always thought had been brought about during the twelve ill-fated years when the Republican party was in power.

"'Now, there is an old and somewhat lugubrious adage which says: "Never speak of rope in the house of a man who has been hanged." In the same way, if I were a Republican leader speaking to a mixed audience, the last word in the whole dictionary that I think I would use is that word '.'"

"Let’s face it. Members of the so-called 'Party of Personal Responsibility' only stick to that motto when trying to deny children a school lunch program. When it comes to taking responsibility for the disastrous results of their policies… well.. they just LIE – 'big' and often!

"Ted Kennedy put it best when he said, 'I am Pro-choice. Mitt Romney is Multiple-choice.” It’s no secret on both sides of the aisle that Mitt Romney will say and do anything to get elected.

"You see, the billionaires and their Republican puppets loathe democracy – they loathe 'We The People' and will do whatever it takes to continue using the working people of this nation as mere hosts from which to suck profit and discard. They want the working people overworked, confused, and fighting against other struggling people lest they realize powerful interests are using them as the useful idiots in their own demise." 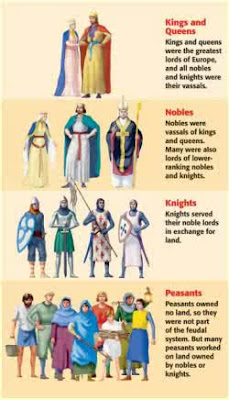 It's no secret that the GOP, as the water carrier of the American Conservative leadership and the greediest of our wealthy class, lies.  The Dirty Little Secret is that the Conservatives MUST lie in a representational democracy - so far - as ours, in order to gain and retain public office.

And the underlying truth of this Dirty Little Secret is that the lies the Conservatives spew should be classed as Criminal behavior, lies that aim to destroy the democratic structure of our Constitution, and lies that seek to support their murderous and thieving political policies.

Their true aim, to take us back to the Age of Feudalism, has been with us forever.  And the only way to keep the Conservative cartel from taking over and plunging us back to the Middle Ages is to Criminalize Conservatism. 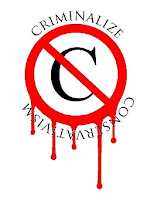 "The great secret that all old people share is that you really haven't changed
in seventy or eighty years. Your body changes, but you don't change at all.
And that, of course, causes great confusion."