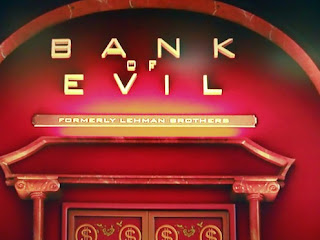 Among the recent news, the indictment and arrest warrant for bankster Jaime Dimond, and the news that New York Attorney General Eric Schneiderman Filed Civil Suit Against JP Morgan Chase, it behooves us to peed at "Jail Corrupt Bankers (AKA Banksters)" is an awesome Facebook page dedicated to...well, the jailing of corrupt bankers.

(From Project Nsearch: "The charge: massive mortgage-backed security fraud involving JPMorgan Chase's and Bank of America's purchase of Bear Stearns during the period of 2007 - 2008.

"P.S. The indictment against...Dimon also charges the little, out-of-control sociopath with over a ten (10) year period blatantly co-mingling customer insured (FDIC) segregated accounts to write bogus cross-collateralized derivatives on the corrupt London LIFFE Exchange so as to give JPMorgan Chase an advantage when it comes to leverage.") 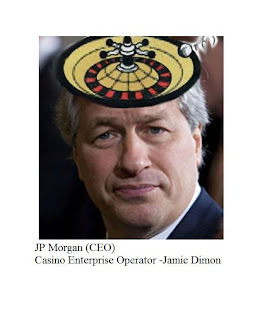 But will Dimond ever see the inside of a prison?  Doubtful - it takes a democracy like Iceland, yes - Iceland, to make democracy work when faced with organized crime in the banking system.  In the article, "Iceland Has Jailed Bankers.  Why Can't We?," please note how a true democracy works in the following reprint of the article at Wepartypatriots.com: 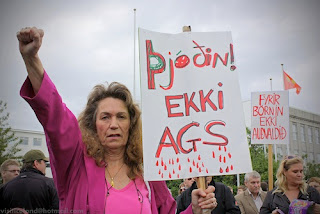 "The people of Iceland are currently doing what Americans can only dream of, dismantling a corrupt political system and arresting the bankers who caused the country’s financial collapse in 2008.

"They have rewritten their constitution so such abuses of power and trust will (hopefully) never be allowed again. The process of changing their government took several years and was based around rejecting violence and using peaceful progressive consumer resistance.

"Dismayed by their bankrupt status, Icelanders began to research where their money went and refused to spend money on products that profited the corporations who caused the collapse. Iceland is home to the world’s oldest democracy — standing since 930 — so its people took peacefully to the streets demanding change and educating neighbors on how to maximize their efforts. The process began in 2008 when the government decided to nationalize its three largest banks:

"This quiet revolutionary process has its origins in 2008 when the Icelandic government decided to nationalise the three largest banks, Landsbanki, Kaupthing and Glitnir, whose clients were mainly British, and North and South American.

"After the State took over, the official currency (krona) plummeted and the stock market suspended its activity after a 76% collapse. Iceland was becoming bankrupt and to save the situation, the International Monetary Fund (IMF) injected U.S. $ 2,100 million and the Nordic countries helped with another 2,500 million.

"Citizens demanded, in addition, to convene early elections, and they succeeded. In April a coalition government was elected, formed by the Social Democratic Alliance and the Left Green Movement, headed by a new Prime Minister, Jóhanna Sigurðardóttir.

"Throughout 2009 the Icelandic economy continued to be in a precarious situation (at the end of the year the GDP had dropped by 7%) but, despite this, the Parliament proposed to repay the debt to Britain and the Netherlands with a payment of 3,500 million Euros, a sum to be paid every month by Icelandic families for 15 years at 5.5% interest.

The move sparked anger again in the Icelanders, who returned to the streets demanding that, at least, that decision was put to a referendum. Another big small victory for the street protests: in March 2010 that vote was held and an overwhelming 93% of the population refused to repay the debt, at least with those conditions.

Iceland has shown the rest of the world the power of responsible progressive resistance. When the Nordic country’s constitution was rewritten, it included safeguards that were meant to protect the country from meeting a similar circumstance down the road. Included in the constitution was the “Modern Media Initiative” that aims to make Iceland a safe haven for investigative journalism and a freedom of information act that safeguards sources and journalists.

On the banking front, Olafur Thor Hauksson was named to investigate the bankers responsible for the collapse and began arresting bankers in early 2011. In February of this year, American Conservative political pundit/televangelist Pat Robertson recommended that the United States follow Iceland’s lead and begin to prosecute the bankers who caused our financial collapse. On his show, the 700 Club, Robertson said:

“'We could start putting all of those bankers in jail. There was not one banker prosecuted and so many people were lying, and so-called "no-doc loans" and liars’ loans, and none of them have been held accountable. I’m not for putting people in jail. I’m sick of these — we’ve got too many penalties. Too many penalties, too many criminal sanctions, too many people in prison. But here is an opportunity for the people who wanted, you know, to enforce laws, to enforce that one. There must be some laws against lying on documents. I’m sure there are.'

“'Lying to banks is a super no-no,' he added. 'It has criminal sanctions, but nobody so far has had to pay the price, but Iceland is leading the way and their GDP is growing, and all of a sudden, they were in a terrible mess, terrible mess, and look what is happening!'

Americans need to view the situation in Iceland through a slightly different lens. Changing our constitution is not particularly realistic considering the country’s obsession with its history. It would also set a dangerous precedent. However, the peaceful activism used by the people of Iceland against monetary overreach could inspire a similar movement elsewhere. I’d love to call that elsewhere 'home.'"

The basic sense of criminality of the bankers has come slowly to the American public, supported only by the "Occupy" movements.  It takes only a small step forward to apply this reasoning to acknowledging the criminality of the Conservatives hiding in their private bank called the Republican Party.  And once we recognize that "Conservatism" is a fraudelent term, a faux political theory hiding the underlying conspiracy that the greediest of the wealthy among us use to further their agenda, the sooner we will come to the day when we can criminalize Conservatism. 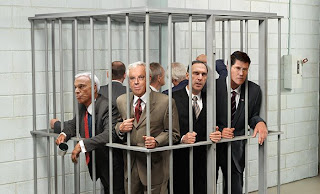 Peter Griffin: Brian, there's a message in my Alpha Bits. It says 'OOO'!Brian
Griffin: Peter, those are Cheerios.