Truth, Lies, And The Conservative Way 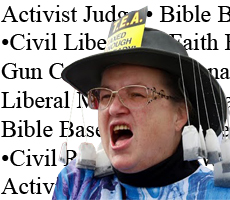 In the article from Liberals Unite called "Right Wing Catch Phrases Translated," the "internet news magazine serving the liberal community", author Samuel Warde has treated us to a delicious collection of memes from the Conservatives that will be useful when you actually have to talk to one of them.  Here are the first 10:

Activist Judge: Any judge attempting to protect the rights of minorities or the disadvantaged, particularly homosexuals

Alternative Energy Resources: deregulated federal parks, forests and wilderness areas and any other new place to explore for oil

Bible based: Anything in the Bible supporting the right-wing agenda

Civil Right: The guarantee of equal rights to everyone as embodied in the Declaration of Independence and the Constitution (excludes those invoked by gays, women, minorities and the poor and otherwise disadvantaged)

Class Warfare: Any attempt to raise minimum wage or taxes on the wealthy

Faith Based Initiative: Payoffs to the Conservative Christian Right

Free Markets: No-bid contracts to Halliburton and other friends of the GOP and Tea Party

In a debate with a Conservative sheeplet, this article will be helpful, and can even motivate us to define our own right-wing catch phrases.  It also nicely complements our article in the page contained in the tab below the banner, "Conservative Rhetoric," or "How To Master Conservative Political Arguments, In Six Easy Steps, Easily Defeating The Most Brilliant Liberal Opponents Without Raising A Sweat," (http://www.criminalizeconservatism.com/p/war-on-america.html). 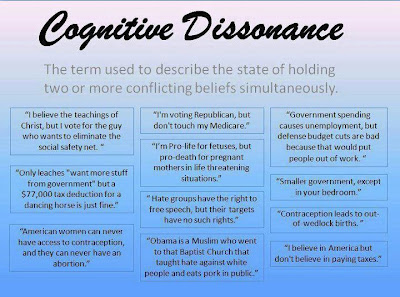 Much of Mr. Warde's translation has to do with the sheeplets's difficulties managing their Cognitive Dissonance, the "...the term used in modern psychology to describe the state of holding two or more conflicting cognitions (e.g., ideas, beliefs,values, emotional reactions) simultaneously. In a state of dissonance, people may sometimes feel surprise, dread, guilt, anger, or embarrassment. The theory of cognitive dissonance in social psychology proposes that people have a motivational drive to reduce dissonance by altering existing cognitions, adding new ones to create a consistent belief system, or alternatively by reducing the importance of any one of the dissonant elements (Wikipedia --> http://en.wikipedia.org/wiki/Cognitive_dissonance). 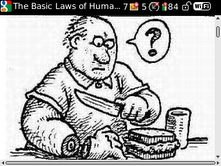 Others think it's because Conservative sheeplets are intellectually challenged (stupid) (http://www.criminalizeconservatism.com/search/label/conservatives_are_stupid), and that stupidity cannot be cured - or underestimated. --> http://cantrip.org/stupidity.html

"I don't believe one grows older. I think that what happens early on in life is
that at a certain age one stands still and stagnates."
T. S. Eliot