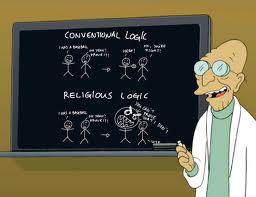 In yesterday's posting, "Stupid Is As Stupid Does, Revisited," we noted an "...important discovery: the linkage between religion and Conservative logic - not from the standpoint of the logical process that leads us to prove against the existence of a Christian god, but from another revelation - that the most common Conservative fallacy, 'What happened to someone once, will always happen to everyone,' is a result from listening to evangelical pastors and their Thou Shall Nots..."

This was the first, and most probably the one of the last mentions of religion except for this posting on this site.  Web sites devoted to the logic or illogic of religion permeate the blogosphere, and Criminalize Conservatism will thrive without adding to them.

We only comment on the Founding Fathers' insistence on the "wall of separation of church and state," an objectionable theme to Conservative evangelicals, but a truism nonetheless backed by numerous statements by most all of the signers of the Declaration of Independence and their heirs.  ("Quotations that Support the Separation of State and Church" --> http://www.infidels.org/library/modern/ed_buckner/quotations.html


An essay called "The Separation of Church and State from the American Revolution to the Early Republic," well worth reviewing and geared towards the younger students commenting on this topic can be found here --> http://nationalhumanitiescenter.org/tserve/eighteen/ekeyinfo/sepchust.htm 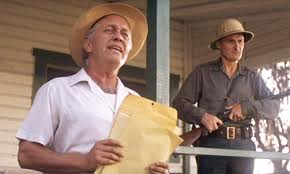 From an essay, "What We've Got Here Is A Failure To Communicate," by John W. Loftus, MA, MDiv, ThM, who can be found at http://www.debunkingchristianity.blogspot.com:

"The Thirty Years' War (1618-1648) was one of the most destructive wars in European history that pitted Christian against each other.  This war was fought primarily in Germany, but other countries got involved as well.  Roman Catholicism and Protestatn Calvinism figured prominently in the opposing sides of this conflict.  So great was the loss of life from tis war that estimates show one-third of the entire population of Germany was killed.  Wurttemerg lost three-quarters of its entire population. 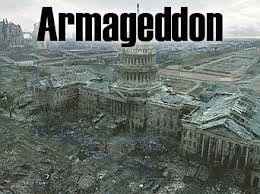 "Brandenburg suffered the loss of half of its populartion, as did Marburg andAugsburg, while Magdeburg was reduced to rubble.  Outside of Germany nearly one-third of the Czech population died as well (To read about this devasting war, see C. V. Wedgwood, The Thirty Years' War, New York: New York Review Books Classics, 2005).  Christian apologist Paul Copan admits 'Denominational differences were a matter of life and death.' (Copan, When God Goes to Starbucks: a Guide to Everyday Apologetics, Grand Rapids, MI: Baker Books, 2008,  p. 192)

"That's an understatement.  We're talking about a Christian bloodbath.  From this conflict the idea of religious tolerance was born, and with it the basis for modern democracy, something we find precursors of in ancient Greece."

"Guys are lucky because they get to grow mustaches.  I wish I could.  It's like having a little pet for your
face."
Anita Wise