(Except for a very slight difference in the last paragraph of this reposting of this article from Mafiatoday.com, doesn't this story ring a bell in thinking about the role of Conservatives in the U.S. today?  Read on.)

"...The building at Mirabeau and Vauban streets is the premises of Pavage CSF Inc., a paving company that has received tens of millions of dollars in contracts from the City of Montreal for work repairing and constructing sidewalks, curbs and traffic islands.

"It is also listed in the provincial corporations registry as an office of Mirabeau Construction, a company that has landed contracts for at least $24 million in work, including major work on city sewers.
Numbered companies."

"Arcuri has ties to the Rizzuto mob family. His name appears about 20 times in summaries of wiretaps from the joint police anti-Mafia operation Project Colisée, and he was spotted with Mafia bigwigs in December 2005 at the former Consenza Social Club in St. Léonard, an east Montreal café where Rizzuto and other mob bosses would meet."

"The latest edition of the book Mafia Inc. by journalists André Noël and André Cédilot says Arcuri was at the heart of the reorganization of the Montreal mob.

"Last weekend, a trio of homicides in the Montreal area — in which one victim was the leader of a prominent street gang and another victim a member of the same group — sparked speculation of emerging civil strife in the city’s underworld. It’s possible things are heating up before the anticipated return to Canada of Montreal Mafia kingpin Vito Rizzuto, who is scheduled to be released from a Colorado prison in the fall..."

And now, a report from the web site ips-dc.org:

Yet tens of billions of these scarce tax dollars are getting diverted. These tax dollars are flowing from average Americans who depend on public services to the kingpins of America’s private sector. They’re subsidizing, directly and indirectly, the mega-million paychecks that go to the top executives at our nation’s biggest banks and corporations. 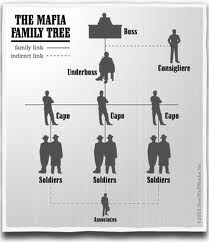 It's time to look at the New American Mafia, the Conservative "Administration." (See "Italian Mafia Lingo" for more --> http://www.fanabala.com/)  In Wikipedia's article on the American Mafia, "...the American Mafia...is a secret criminal society. Its members usually refer to it as Cosa Nostra (Italian for 'our thing'). The press has also coined the name 'National Crime Syndicate' to refer to the entirety of U.S. organized crime, including the Mafia."

The American Conservative mob is also secretive, a criminal society, and THE National Crime Syndicate in the U.S., but harboring under the guise of a "political philosophy." and is "..the largest organized crime group in the United States," complete with its "Big Earners" down to its "Babbos, (A mafia term for an underling who is considered to be useless," [and comparable to the Conservative sheeplets who infest the internet] - from fanabala.com.)

(The articles in http://www.gangrule.com/ may ring a bell with those familiar with the history of current venture capital companies.  Gangrule.com has it all: start up money from dubious sources, bribery, extortion of honest businesses that drive them to bankruptcy, murder - but certainly not on the level of Conservative large-scale killings caused by the Conservative consiglieres in our legislatures - and large scale theft from citizenry and government coffers.) 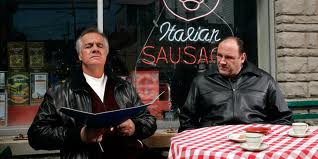 Tony Soprano was a piker compared to the Conservative capos today.  From ownership of the banks, the media, the beverage industry, the casino industry, and businesses in all sectors of the country, the Conservative crime cartel has done what the Sicilian mafiosa failed to do - completely control the country.  The time is long past when Conservatism should have been outlawed.


"Judgement drunk, and brib'd to lose his way,
Winks hard, and talks of darkness at noon-day."