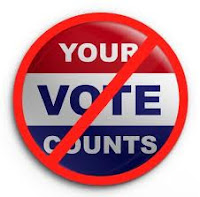 In an article from Colorlines.com, also reprinted in The Nation magazine on May 28th, a description of how Conservatives plan to intimidate you at the polls appeared, entitled:

Here's what is waiting for you when you go to vote this year - "True The Vote,...cloak(ing) their cause in the language and iconography of the civil rights movement,...(a) spin off of the King Street Patriots Texas Tea Party, a group who gained notoriety during the 2008 and 2010 elections for harassing and intimidating Houston voters, True the Vote supports the voter ID laws championed by ALEC and other right-wing groups.

"...True the Vote hopes to have trained a million poll watchers around the country to crackdown on cases of voter fraud—people voting on behalf of dead citizens, undocumented immigrants attempting to vote and people voting twice.

"This lack of evidence, however, didn’t seem to disturb True the Vote’s National Elections Coordinator Bill Ouren, who one day hopes to have at least two sets of poll watchers at every polling station in America. At the summit, Ouren described how voters should feel while under the gaze of True the Vote observers: 'Like driving and seeing the police following you.' 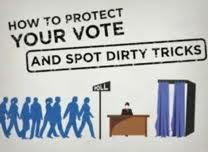 Here is how they do it, from Tea Party Conservatives living in a state with one of the lowest voter turnout in the nation:

"In his presentation, Ouren outlined the distinction between offical election workers and poll watchers—and then gave guidance about how to blur such lines. He encouraged the activists to “build relationships with election administrators” and their political party leaders because 'they control access to the vote.' He then asked Harris County (Houston) poll workers and watchers in the audience to stand; almost half the room did. Ouren also singled out Harris County clerk Stan Stanart for a round of applause.

"According to Denise Lieberman, a senior attorney with The Advancement Project who tracks the advocacy of partisan election groups including True the Vote, such fraternization between vigilante poll watchers and government officials is cause for concern. For example, The Advancement Project has documented True the Vote’s practice of obtaining voter lists from elections officers to identify voters they believe should be purged. True the Voters also gets lists from election officials of voters who have moved jurisdictions and then sends mailings out to see which ones come back as undeliverable. The activists then use that information, says Lieberman, to create lists for challenging voters on Election Day, a process called 'voter caging.'”

"There was quite a bit of talk at True the Vote about 'protecting minorities' from voter fraud. The conference heard from African-American speakers like former ACORN staffer Anita Moncrief and former Congressman Artur Davis, who blamed his loss in the 2010 race for Alabama governor on corrupt black political machine leaders. There were plenty of statements about helping African Americans and Latino Americans comply with new, restrictive voter ID laws."

And this is not limited to Texas, this from North Carolina - http://www.bluenc.com/right-wing-gears-voter-intimidation-november 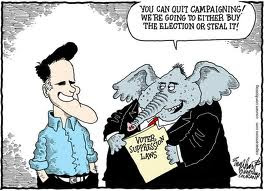 Conservative leaders will stop at nothing to gain power, illegally or not.  What will you do to combat this menace in this year's elections?

"He had discovered the prime grand secret of eternal youth--to keep the decanter circulating,
to stop smoking only when snapping the lighter for his next cigarette and never to retire to
rest before three in the morning."