For years, Cliff Schlecter of "Republican Sexcapades" fame has been posting the outing of Family Values Republicans at http://thepoliticalcarnival.net/tag/republican-sexcapades/ , most recently on the story of Florida Lieutenant Governor being implicated in a sex scandal with a female aid - her defense being that  “Well, hey, I can’t possibly be gay [Giggle!] because [Giggle!] I don’t look like a lesbian!”

The Conservative hypocrisies have been documented for eons; over and over, Conservative leaders get exposed for their peccadiloes, while innocent people get hurt because of the Conservative spouting of family values.  The framing of the family value meme is to gain support from the nortoriously intelligence-challenged of the religious right, according to former Bush Aid, David Kuo. --> http://www.cbsnews.com/2100-18560_162-2089778.html

And this isn't confined to the political leadership.  The Conservatives' support in the Evangelical leadership gets outed as much as the laity. 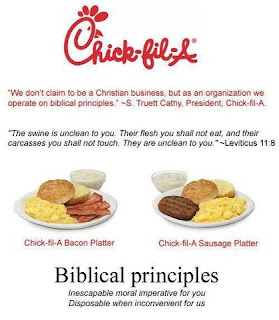 The Advocate.com http://www.advocate.com/society/coming-out/2012/07/27/prominent-antigay-evangelical-blogger-outed-gay reported thus: "Jonathan Merritt, the son of famous evangelist James Merritt, has become a prominent evangelical blogger, writing for, among others, USA Today and The Atlantic (where he most recently wrote about his support of Chick-fil-A).  Turns out he's, as Queerty puts it, also 'a deeply conflicted gay man' who just got busted for canoodling with gay blogger Azariah Southworth.

"Southworth himself said, 'Exposing this truth of Jonathan’s sexual orientation is not an easy decision for me. I take no pleasure in doing this. As I type this my stomach is turning because I know of the backlash he will receive. I have thought about what all of this will mean for him and for me. I base my reasoning in the importance of living an authentic and honest life. We must have radical honesty in the character, intentions and identities of our leaders.'”

Before any Conservative sheeplets report on Democratic hypocrisy, I make the usual point: the ratio of Conservative to Liberal hypocrites, the "family values" meme notwithstanding, is on a par with the ratio of the stars in our Galaxy to our Galaxy. --> http://www.godlikeproductions.com/forum1/message1448028/pg1

"Oh people can come up with statistics to prove anything.  14% of people know that."