The Conservatives' Theft of Democracy 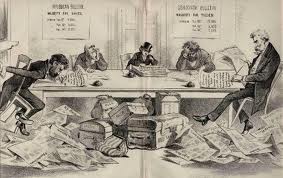 And who was the "institution? The Conservative's chief "legitimate business" entity, the Republican Party.

Inspired by an essay by Wisconsinwave.org, a site "Uniting Wisconsinites against corporatization and austerity, and for democracy and shared prosperity!", and their essay questioning the results of their recent recall that their voters apparently voted fairly on, the following repeated post is dedicated.


"How might this fraud have been carried out? One way to steal votes is to tamper with individual ballots -- and there is evidence that Republicans did just that.  In Clermont County, where optical scanners were used to tabulate votes, sworn affidavits by election observers given to the House Judiciary Committee describe ballots on which marks for Kerry were covered up with white stickers, while marks for Bush were filled in to replace them.  Rep. Conyers, in a letter to the FBI, described the testimony as 'strong evidence of vote tampering if not outright fraud.' (184)  In Miami County, where Connally outpaced Kerry, one precinct registered a turnout of 98.55 percent (185) -- meaning that all but ten eligible voters went to the polls on Election Day.  An investigation by the Columbus Free Press, however, collected affidavits from twenty-five people who swear they didn't vote. (186) 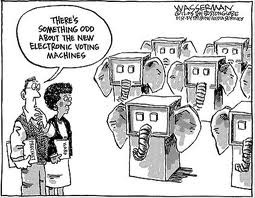 "In addition to altering individual ballots, evidence suggests that Republicans tampered with the software used to tabulate votes.  In Auglaize County, where Kerry lost not only to Connally but to two other defeated Democratic judicial candidates, voters cast their ballots on touch-screen machines. (187)  Two weeks before the election, an employee of ES&S, the company that manufactures the machines, was observed by a local election official making an unauthorized log-in to the central computer used to compile election results. (188)  In Miami County, after 100 percent of precincts had already reported their official results, an additional 18,615 votes were inexplicably added to the final tally.  The last-minute alteration awarded 12,000 of the votes to Bush, boosting his margin of victory in the county by nearly 6,000. (189)"

And why, you chuckle, why hasn't this been broadcast to the heavens by the news media? Is this Tinfoil Hat Madness promulgated by the kooky left wingers?

"The lone news anchor who seriously questioned the integrity of the 2004 election was Keith Olbermann of MSNBC.  I asked him why he stood against the tide.  'I was a sports reporter, so I was used to dealing with numbers,' he said.  'And the numbers made no sense. Kerry had an insurmountable lead in the exit polls on Election Night -- and then everything flipped.'  Olbermann believes that his journalistic colleagues fell down on the job.  'I was stunned by the lack of interest by investigative reporters,' he said.  'The Republicans shut down Warren County, allegedly for national security purposes -- and no one covered it.  Shouldn't someone have sent a camera and a few reporters out there?'

"Olbermann attributes the lack of coverage to self-censorship by journalists.  'You can rock the boat, but you can never say that the entire ocean is in trouble,' he said.  'You cannot say: By the way, there's something wrong with our electoral system.'"

The problem with this institutionalized vote theft by the Conservative criminals is, of course, that Democracy is dead. As Kenney notes:

"The single greatest threat to our democracy is the insecurity of our voting system.  If people lose faith that their votes are accurately and faithfully recorded, they will abandon the ballot box.  Nothing less is at stake here than the entire idea of a government by the people.

"Voting, as Thomas Paine said, 'is the right upon which all other rights depend.'  Unless we ensure that right, everything else we hold dear is in jeopardy."

Unless we "ensure that right, we are all doomed to a perpetual life under the Conservative version of Midde Age feudalism.

Subsequent to the 2004 Election, Senator Kerry tried to protect the Nation from every experiencing institutionalized vote fixing again:

"To help prevent a repeat of 2004, Kerry has co-sponsored a package of election reforms called the Count Every Vote Act.  The measure would increase turnout by allowing voters to register at the polls on Election Day, provide provisional ballots to voters who inadvertently show up at the wrong precinct, require electronic voting machines to produce paper receipts verified by voters, and force election officials like Blackwell to step down if they want to join a campaign. (205)  But Kerry says his fellow Democrats have been reluctant to push the reforms, fearing that Republicans would use their majority in Congress to create even more obstacles to voting.  'The real reason there is no appetite up here is that people are afraid the Republicans will amend HAVA and shove something far worse down our throats,' he told me."

A shorter essay from January/February 2005 by Fair.org summarizes much of the Kennedy article - and more - here --> http://www.fair.org/index.php?page=2482 . 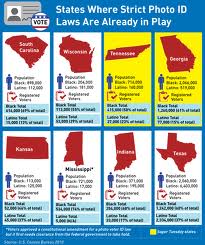 But the expectation from Kerry in Kennedy's article, "fearing that Republicans would use their majority in Congress to create even more obstacles to voting," has become a reality.
And the recent article by the L.A. Times, hardly a liberal newspaper, entitled, "Suppressing the vote, state by state," stated that "In 2011 and 2012, 11 states have passed new voter ID laws.  Not coincidentally, the impetus has come from Republicans.  In an embarrassing display of candor, the Republican leader of Pennsylvania's House, in rattling off a series of legislative accomplishments, said, 'Voter ID, which is gonna allow Gov. Romney to win the state of Pennsylvania — done!'  Republican-controlled legislatures also have enacted restrictions on early voting, including voting on Sundays (a day African American churches often sponsor 'Souls to the Polls' programs), and ended same-day registration."