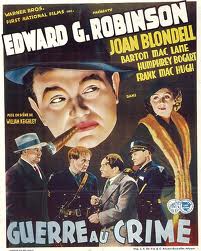 Those of my generation, and older, were brought up on gangster films starring Humphrey Bogart, James Cagney, George Raft and Edward G. Robinson. A common theme with their films and countless others such as The Godfather  and the brilliant Academy and Golden Globe Award film, Born Yesterday, was the link between organized crime and politicians: no gangster of any note was free from prosecution without buying a politician or two.

In Born Yesterday, "Uncouth tycoon Harry Brock goes to Washington, D.C. with his brassy mistress, Emma 'Billie' Dawn, and his crooked lawyer, Jim Devery, to "influence" a politician or two."

And in Psmith, Journalist, a comic novel by Englishman P.G. Wodehouse, creator of the team of Bertie and Jeeves, the following dialogue illustrates a common way of life in New York City in the twenties:

"I fancy not, Comrade Windsor.  If I did, the

name has escaped me.   Who was this cleric?"

"He was the first boss of the East Side

gang, before Kid Twist took it on."

"He was arrested dozens of times, but he

always got off.  Do you know what he said once, when they pulled him for thugging

a fellow out in New Jersey?"

"I fear not, Comrade Windsor.  Tell me

you want to look where you're goin'; I cut some ice in this town. I made half

the big politicians in New York!'   That was what he said."

The Citizens United case that the Supreme Court decided on that ultimately legalizing bribery in the U.S. "...in which the Court held that the First Amendment prohibited the government from restricting independent political expenditures by corporations and unions..." guarantees a return to the Good Old Days, where mob leaders and "legitimate businessmen" like Harry Brock in the persona of the Kock brothers and Newt Gingrich's casino owner Sheldon Adelson will buy GOP votes at will.

"In the United States, the Organized Crime Control Act (1970) defines organized crime as "The unlawful activities of [...] a highly organized, disciplined association [...]".[3] Criminal activity as a structured group is referred to as racketeering and such crime is commonly referred to as the work of the Mob." (http://en.wikipedia.org/wiki/Organized_crime) 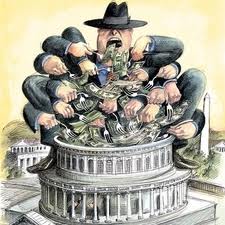 "The unlawful activities of [...] a highly organized, disciplined association," the Conservative crime syndicate, are now wrapped into a tighter package than even envisioned by the gangsters of yesteryear, thanks to the Supreme Court Five - the politicians and their contributors are now as one.

Our lawmakers - from our city councils to our Congress, our chief executives - from small town mayors to the President of the United States, and our judges - from justices of the peace to the Supreme Court justices, will now be owned by the wealthiest in our country, aided by the simple tool of money from unrestricted political contributions plunged into the coffers of the worst of our politicians - the greedy and the power-hungry.

And our democracy, the democracy of We The People, will be lost.