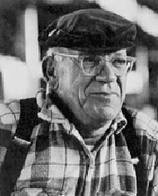 Eric Hoffer, the self-described "longshoreman philosopher" wrote the definitive work describing the participants in mass movements - The True Believer, a short, yet brilliant tome explaining the typical make-up of the leaders and followers of mass movements like Nazism, Christianity, Islam, the Ku Klux Klan, and the modern-day phenomena of Conservatism, together with it's spin-off movement, the Tea Party. 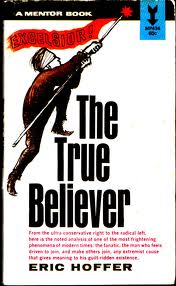 Though written in 1951, The True Believer is completely relevant today to help understand the demagogic nature of Conservatism. Wikipedia summarizes Hoffer's mindset when writing The True Believer, "Concerned about the rise of totalitarian governments, especially those of Adolf Hitler and Joseph Stalin, he tried to find the roots of these 'madhouses' in human psychology.  He postulated that fanaticism and self-righteousness are rooted in self-hatred, self-doubt, and insecurity.  In The True Believer he claimed that a passionate obsession with the outside world or the private lives of others was an attempt to compensate for a lack of meaning in one's own life. The book discusses religious and political mass movements, and extensive discussions of Islamand and Christianity.  A core principle in the book is Hoffer's assertion that mass movements are interchangeable: fanatical Nazis became fanatical Communists, fanatical Communists became fanatical anti-Communists, and Saul, persecutor of Christians, became Paul, a fanatical Christian. For the 'true believer', substance is less important than being part of a movement."

The True Believer, under the complete control of the often charismatic leader, is not the Average Man suddenly caught up in an uplifting moral crusade, the square jawed crusader nobly on the lookout for evildoers, but more often the dispossessed outcast: the misfit, outcast, minority, adolescent, the ambitious, the obsessed, the impotent in mind or body, and certain categories of the poor, the extremely selfish, the bored, and the sinners.

Wikipedia notes Hoffer's belief, that the rapid change engendered by "mass movements and juvenile mindsets tend to go together, to the point that anyone, no matter what age, who joins a mass movement immediately begins to exhibit juvenile behavior."Hoffer writes that "...all mass movements strive to impose a fact proof screen between the faithful and the realities of the world.  And, that that faith becomes the things the fanatic declines to see.  He avers how startling it is to realize how much unbelief is necessary to make belief possible, and that faith manifests itself not in moving mountains, but in not seeing mountains move. He say's that in the context of mass movement's faith should not be judged by its profundity, sublimity, or truth but by how thoroughly it insulates the individual from himself and the world as it is."

The mental makeup of the sheep of the Conservative shepherd-leaders is no different than that of the followers of David Koresh or the followers of Jim Jones who willingly surrendered to his Jonestown Kool Aid mass suicide.   Hoffer notes one of Hitler's musings, "If the Jew did not exist, we should have had to invent him.  We must have a tangible enemy, not merely an abstract one."   As stated here so often, the calls of "liberty," "balanced budgets," "right to life," "family values," and the rest are merely memes tailor made for the confused followers, themes that are interchangeable with others and meant only to "rally the troops."

Hoffer notes that the theme of liberty is a disconnect for the True Believer, in our case the Conservative True Believer - "They who clamor loudest for freedom are often the ones least likely to be happy in a free society.  The frustrated, oppressed by their shortcomings, blame their failure on existing restraints.  Actually, their innermost desire is for an end to the 'free for all.' They want to eliminate free competition and the ruthless testing to which the individual is continually subjected in a free society."

The absolute certainty in the dogma professed by Limbaugh and other Conservative leaders are accepted in toto by his "dittoheads" and acerbic participants in the Free Republic Forum are explained by Hoffer's observation, "We can be absolutely certain only about things we do not understand."

From a reviewer of the book, the mass movement leaders implement their strategies through manipulating their followers thus:

1. Separating them from the real self by means of assimilation into the collective.
2. Creating a make-believe self or a collective show.
3. Making them hate the present and worship the future; the present is not only portrayed as miserable but is deliberately made so.
4. Separating them from reality with the wall of dogma. Observation and experience are rejected in favor of doctrine which provides certitude.
5. Keeping them in a state of fanaticism by inflaming passions and breaking down the will, thus transforming them into automatons. Reason is ineffective in trying to free a fanatic from these mental chains.

When Conservatism is finally outlawed, thought must be given to re-educating the followers; their fates should not be those of the leadership who used their "juvenile mindsets," they should be helped, not punished. 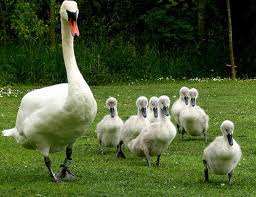 M. Lamar Keene, in his version of the True Believer, wrote:  "The true -believer syndrome merits study by science.  What is it that compels a person, past all reason, to believe the unbelievable.  How otherwise can a sane individual become so enamored of a fantasy, an imposture, that even if it's exposed in the bright light of day, he still clings to it -- indeed, clings to it all the harder?"  (http://www.skepdic.com/truebeliever.html)

"The idiot merriment of thoughtless men!

How the fish laugh at them, that swim and toy

About the ruined ship, wrecked deep below,

Whose pilot's skeleton, all full of sea weeds,