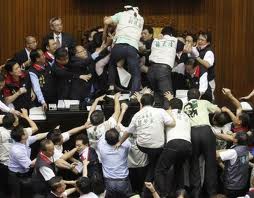 I provided a link to an international list of political parties yesterday, http://www.politicsresources.net/parties.htm, to illustrate the fact that political parties and factions evove from interests in almost an innumerable fashion.

Today's post will contain links to other articles that list political parties other than those in a two-party system, showing the undereducated or uninformed that multiple party systems do indeed exist in other countries. The two-party system, in fact, often blurs the distinctions between factions, resulting in the voter apathy so prevalent in the U. S.

Even at present, other parties are players in the U. S. - the Green Party, the Libetarian Party, and the Constitution Party - and there are thirty six other national parties in existence! (http://en.wikipedia.org/wiki/List_of_political_parties_in_the_United_States)

And that's not all. Within the States, there are thirty two other parties, plus four more in Puerto Rico and one in the Virgin Islands.

Historians can point to sixty eight political parties active in the U. S. in the past, and we can also see that there are thirty non-electoral organizations who "...do not nominate candidates for but otherwise function similarly to political parties, (and) (s)ome of them have nominated candidates in the past."

And for a list of "frivilous parties" around the world, including the Beer Lovers Party, the Donald Duck Party, and the Double-tailed Dog Party, please take a peek at http://en.wikipedia.org/wiki/List_of_frivolous_political_parties.

Third-party politics have influenced Presidential elections in the past, though elbowed out of the way by the major parties sooneer or later, another fact of life in a two-party system.

It takes little thought to realize that the elimination of Conservatism doesn't mean that the remaining factions will be in agreement.  Recent history shows us that the battles between environmentalist and labor groups will be ongoing and vocal.

Whether or not a two-party Congress will open the gates to a multiple-party system is moot.   After the criminalization of Conservatism is realized, the election of congressional candidates sympathetic to the ability of all interests to speak out and be represented, must be a reality.

"You tried your best and you failed miserably. The lesson is 'never try'."

(A correction was made to the headline of yesterday's post, substituting "Congressional" for the word "Conservative." One mustn't try to start a project without that second cup of coffee.)
Posted by Joyce, Jnr. at 9:13 AM 0 comments