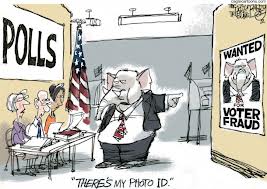 From Thom Hartmann and Sam Sachs at The Daily Take, "The Battle for Democracy Is Year-Round," showing that unless you thought that Conservatives would learn from the Election of 2012 and change your ways, you have a surprise coming - from Truthout.org:

"Republicans think that if they can just keep that 'base of the base' - Reagan's fictional Welfare Queens and their dark-skinned relatives – from voting, then Republicans will begin to win again. 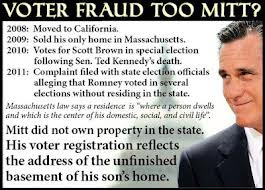 "But there's also something much more sinister in the Republican plans. The post-election belittling of Democratic voters as 'moochers' (to use the words of Ayn Rand) has nothing on the pre-election efforts to stop Democratic voters from voting.

"In the last two years, more than 20 restrictive voter suppression laws were passed by Republicans in 17 states including five battleground states. Voter suppression ID laws, new obstacles to voter registration, and cuts to early voting hours were all employed by Republican state legislators, Governors, and election officials around the nation to suppress the vote of working Americans and, particularly, minorities. As Mother Jones uncovered, the most notorious of these ploys, the Voter suppression ID laws, disproportionately affected minorities, young people, seniors, and the poor – or those who (Romney spolesman, ex-Governor John) Sununu would refer to as the Democrats' 'base of their base.'

"Republicans are hoping this minority enthusiasm wanes after another round of new Voter ID laws in 2013 – an off-year for elections. As MSNBC reported, Republicans in Montana and the battleground states of Virginia, Iowa, and Nevada are gearing up to pass more Voter suppression ID laws, or make existing laws even more restrictive in the upcoming legislative session.

"In Wisconsin, Republican Assembly Speaker Robin Vos floated the idea of his state adopting a new Voter Suppression ID law, too. In a recent interview, Vos said, 'Having photo ID is something that is broadly supported by the public ... It is something that I really hope we will have in place by the next general election.' 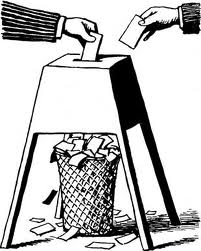 "Republicans like Sununu sleep well at night because they honestly believe they are protecting the nation from that nearly-half of the electorate that now relies on government insurance programs to get by as a result of the damage the banksters caused to our economy in 2007-08 or because they're retired or disabled. They believe that if they can just keep poor and minority voters from the polling stations on Election Day, then Republicans will win, and can then cut loose the social safety net, stop government spending to help people down on their luck, and usher in a new era of Ayn Randian 'personal responsibility.' In fact, most Republicans would likely agree with Ted Nugent who, in The Washington Times, recently called for 'suspending the right to vote of any American who is on welfare.'

"But the real truth here is that Republicans have just never really been all that interested in democracy. From the battles between Jefferson and the Federalists over how our Senate would be elected, to the numerous suffrage fights for African Americans and women that always confronted fierce opposition from Conservatives, more democracy always meant less power for the rich, and that has always unsettled the Right.

"Prominent Conservative strategist Paul Weyrich explained in 1980, 'I don't want everybody to vote. Elections are not won by a majority of people. They never have been from the beginning of our country and they are not now. As a matter of fact, our leverage in the elections, quite candidly, goes up as the voting populace goes down.'

"Weyrich went on to found the American Legislative Exchange Council – ALEC – which, not so coincidentally, authored several of the restrictive Voter ID laws passed all around the nation in 2011 and 2012."

"The point is, Republicans will not rest in their efforts to suppress poor and minority voters in future elections.

"There's no time to celebrate electoral victories because, to keep up with the Right's relentless assault on voters, the fight over voting rights in America must continue 365 days a year.

"Only after a federal right to vote is enshrined in our Constitution or passed into law by Congress and survives the test of the Supreme Court can we know for sure that our elections are secure and our democracy reflects the voice of all Americans." 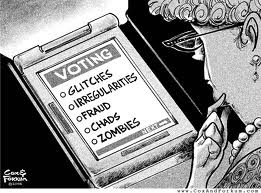 And from Nick Baumann at Mother Jones, "After Romney Loss, GOP Resurrects Plan to Rig Electoral College, Barack Obama won a whomping Electoral College victory on November 6. Now Republicans want to change how electoral votes are awarded," showing us exactly how the Conservative criminal cartel plans to steal the next election(s):

"(T)he presidential election isn't a nationwide contest, it's a state-by-state fight, with each state worth a certain number of electoral votes (the District of Columbia gets 3, too). There are 538 electoral votes total; if you win 270 or more, you're headed to the White House—even, as George W. Bush can assure you, if you don't win the popular vote. The Constitution allows each state to allocate electoral votes however it wants, but in every state except for Nebraska and Maine, the contest is winner-take-all. If you get the most votes in Pennsylvania, you get all of its electoral votes.

"Republicans want to change that. On December 3, Dominic Pileggi, the powerful Republican majority leader of the Pennsylvania state Senate, announced that he plans to introduce legislation that would change how the state allocates its electoral votes. This shouldn't be a surprise: Pileggi was one of the Pennsylvania politicians behind the pre-election plan to change Electoral College rules. 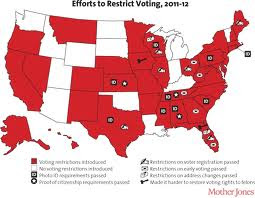 "Before the election, Pileggi's plan (backed by a mysterious dark-money group called All Votes Matter) was to allocate electoral votes by congressional district, with the winner of each district receiving one electoral vote and the statewide winner getting a two-electoral-vote bonus. That might not seem like a big deal. But Pennsylvania, like other blue states in the upper Midwest, was subjected to a very effective Republican gerrymander after the 2010 midterm elections. Republicans won 13 of its 18 districts in 2012, so if Pileggi's pre-election plan had been in effect, Obama could have been awarded as few as 7 of Pennsylvania's 20 electoral votes, despite winning the state.

"Pileggi's post-election scheme has a new twist. Instead of awarding electoral votes by congressional district, it would award them in relation to the statewide popular vote, with a two-electoral-vote bonus for the winner. That would prevent blatantly undemocratic effects like a candidate losing a state's popular vote but still winning its electoral votes. But it would still have a similar effect to Pileggi's earlier idea—it would ensure that at least some of Pennsylvania's 20 electoral votes, which have gone to Democrats in every election since 1992, would go to Republicans. In a close election, that could change the outcome.

"Pileggi has said his new plan 'much more accurately reflects the will of the voters in our state.' (He did not respond to a request for comment.) Dems say that misses the point. 'The Republican legislature has been brutally honest about wanting to move Pennsylvania into the Republican column,' says Daniel Roth, a spokesman for the Democratic Legislative Campaign Committee, which works to elect Dems to state legislatures. 'They wouldn't be doing this if Pennsylvania had gone Republican in the past six elections. This is clearly an attempt to move electoral votes to the Republican column because they know they cannot win the state.'
"Pileggi isn't the only GOPer mulling a change to Electoral College rules after Obama's victory. At a conference last month, John Husted, Ohio's Republican secretary of state, said the state could make its elections less controversial by awarding its electoral votes by congressional district. Since Ohio, like Pennsylvania, has a congressional district map that was gerrymandered by Republicans, this idea, if in effect in 2012, would have handed the majority of the state's electoral votes to Romney. But Husted, it seems, misjudged what would make Ohio elections less controversial—after national attention, he backed off his comment, saying he wasn't 'advocating' a change, just speaking theoretically. 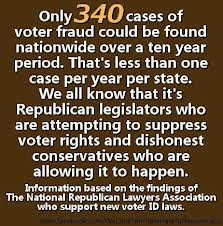 "At the National Review's influential blog The Corner, Rich Lowry was similarly cautious when mooting the idea of Electoral College changes that could boost Republicans' hopes. 'A friend sends along this e-mail. I post it, not as an endorsement but to encourage discussion,' Lowry wrote, introducing a long email endorsing awarding electoral votes by congressional district. 'From a political perspective, we simply cannot allow the Democrats to have 220 electoral votes in the bag every single election,' Lowry's friend wrote. 'That's the road to being a permanent minority party.' The solution? Change the rules."

Listen to the words: "not advocating a change, just speaking theoretically," "not as an endorsement but to encourage disussion."  Underneath all of the coyness, the real message is "we simply cannot allow the Democrats (to win).

Still think that Conservatism is a bona fide political philosophy and not a vast criminal conspiracy to take over the country?  These words are directly from the mouths of the conspirators and the only conclusion we can swallow is that Conservatism must be outlawed before it's too late. 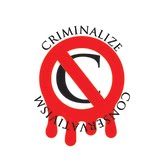 "Love is like war: Easy to begin but hard to end."