Yet Another Republican Sex Offender

Added to a relatively old list of Republican Sex Offenders (http://www.democraticunderground.com/discuss/duboard.php?az=view_all&address=389x1709387), put together long before the Mark Foley, David Vitter or Larry Craig scandals, is the name of hypocritical, anti-gay, moralizing, self-proclaimed Reverend Grant Storms.  The Louisiana Times-Picayune reported on this hypocrit on their website nola.com under the headline: 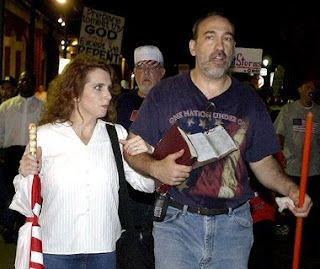 "Storms received national media attention in 2003, for his leading his small congregation through the French Quarter during the annual gay festival, Southern Decadence, admonishing homosexuals and calling the city of New Orleans a 'prostitute' for allowing the event that generates tourism dollars. A Bourbon Street merchants association at one point went to court to get a restraining order barring Storms and his followers from using bullhorns. National news media converged on New Orleans in 2003 to cover his protests.

"LaDart also ordered Storms to be evaluated, apparently psychologically. The judge noted that in Storms' confession, he admitted that Feb. 25, 2011, the day he was arrested, was the third time that week that he masturbated in Lafreniere Park. 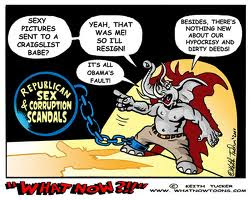 The difference between Conservative and Liberal "sex offenders" is vast, with the additional element of irony - the Republican Party claims to be the party of "family values," and identifies itself with sexual mores associated more with the values of the Victorian era than the 21st century.

As stated so often here, the positions of morality and Christian values are merely a smokescreen to attract the intellectually challenged sheeplets to vote Republican.  The true values of the Republican Party are about Money and Power for the exclusive enjoyment of the upper classes.  When the sheeplets discover that it is the Progressive movement that possesses values associated with the Christian beliefs - charity, compassion, and inclusiveness - and that they are being taken for a ride by the Conservative leadership and its propagandists, then the Conservative criminal conspiracy will be no more.

But is it too late?


"A foolish consistency is the hobgoblin of little minds."