Stupid Is As Stupid Does, Finis. 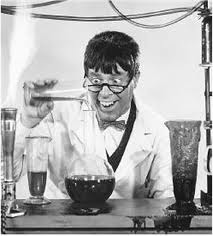 The following is a slightly edited post from the tab/page "Science" at the top of the web page http://www.criminalizeconservatism, and will serve as a finale to the "Stupid Is As Stupid Does" series, even as it served as a prelude to those essays:

The aim of this page was to summarize the scientific studies showing the neurological differences between Conservatives and mainstream Americans, but the vast amount of such studies, which could easily be made into a separate blog, overrules mere summarizing, so instead, we'll list the hard-wired traits of Conservatives and then talk about the individual studies in our blog posts.

These differences may seem repetitive in some cases, but they possess subtle differences that will escape the understanding of the huge majority of Conservative critics, while most liberals can easily make the subtleties out.

We have learned from these studies that Conservatives are:

Authoritarian (submissive to authority but rigid to those they have authority over - the "kiss up, kick down" syndrome so typical of military and corporate personalities); resistant to egalitarian equality; inclined towards group-think; desperate for order; distrustful of "outsiders;" extollers of traditional values; intolerant of ambiguity and attracted to closed-minded definitions of the world, resulting in black-and-white, right-and-wrong, saved-and-damned views; rigid; fearful; less intelligent than Liberals; fearful of death; less integrative in complexity of thought processes; needy of a need for cognitive "closure" - that is, they are closed minded (liberals like to think and take pride in there ability to think); insistent upon illogical, emotional, superficial and motivated or biased reasoning; dogmatic; resistant to change; unable to manage conflict and uncertainty; less tolerant of uncertainty or ambiguity; less intellectually innovative; susceptible to a sense of guilt; rigid when experiencing stress; resistant to scientific truisms; prone to deny inconvenient facts; resistant to contrary evidence; unwilling to compromise, insistent on black and white world views; closed-minded; less formally educated; intolerant of different perspectives and values; insistent upon orderliness and structure; unwilling to consider new information; tending to firmly categorize the world around them; insistent that behavior reflects who a person is - a classic example is blaming a poor person for being lazy; likely to believe those bolstering their own views; apt to lash out against challenges to their beliefs and idols while denigrating the challenger; firm in belief that they are well-informed and factually correct; overconfident in opinions; apt to reason defensively; and even more...
In terms of measuring behavior, Conservatives also tend to believe that everyone has to struggle to succeed in life, that everyone gets what they deserve, and if anyone fails - they deserve it. What their religious and political "authorities" say, and attacks on their in-groups, matters to them much more than their liberal brethren. Their lack of openness also prevents them from pursuing careers in journalism, the arts and sciences, or education where intellectual curiosity and the drive to "get the facts right" attracts the progressive-minded. (In a recent survey, only 13.7% of University professors described themselves as Republicans; a 2009 survey found that only 6% of scientists and those with advanced science degrees were identified as Republicans.)
Conservative followers are different than we are in terms of the structure and functions of their brains. For example, the amygdala, that part of the brain that plays an important role in our responses to threatening stimuli and stimuli that provokes fear, and the anterior cingulate cortex, involved in detecting mistakes and errors, are distinctly different in the skulls of Conservatives. They're not "crazy," just wrong-headed, different people with different personalities, needs, motivations, and responses that are recessive traits in coping with a changing world.

It may be true that Conservatives provide more efficient leadership skills during wartime because of their psychological sense of sureness. But we see that their electoral success depends upon inventing enemies and supporting arms merchants and war itself. Certainly Great Britain's intuitive rejection of their beloved Winston Churchill at the polls after World War II ended helps us understand that thesis. But true world wars are a thing of the past, having been eliminated by the realization of Mutually Assured Destruction, aka M.A.D., that halted the senseless nuclear arms race between the US and the former USSR. The Conservatives' continual quest for total power is best understood when we remember the Bush-Cheney lies that led to the preemptive Iraq invasion and the repeating war drums that helped them achieve a second term for George and Dick, rigged voting machines coupled with voter suppression and intimidation notwithstanding. 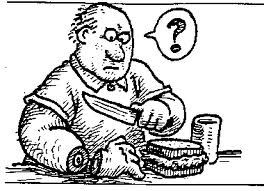 Republicans obviously resent studies that impugn their intelligence more than they object to other personality studies, but in all seven studies done about Fox "News" viewers, those viewers were shown to be the "most consistently uninformed."

More alarmingly, around the time a survey showed that Republicans were slightly below average IQ and Democrats slightly higher on the average, another study following children to adulthood proved that low-IQ children grew up to be prejudiced, racist Conservatives. 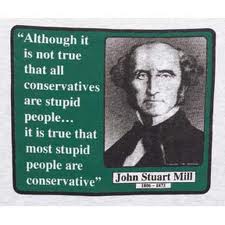 "A conservative is a man with two perfectly good legs who, however, has never learned to
walk forward."