How Conservatives Stole The Peoples' Media

For those of you that wonder why the Conserevatives seem to dominate the media, giving the impression that the  populace must be overwhelmingly Conservative too, Len Hart - the Existentialist Cowboy - wrote a piece a little over a year and a half ago that is "must" reading material for everyone, entitled:

Hart explains, "... throughout the nation there were several thousand locally owned television and radio stations; all of them were required by the FCC to 'serve local interests'. As a result, many radio stations in small and large 'market's maintained viable 'News' and/or 'Public Affairs Departments'. These stations had a finger on the pulse of the listening community like few if any have today...

He points out even, "..(in) 1983, 50 corporations controlled most or all news media operating in the U.S. Nevertheless, Ben Bagdikian was labeled "alarmist" when he pointed out that fact in his book -- The Media Monopoly. He was no alarmist! His 4th edition [1992] stated: "in the U.S., fewer than two dozen of these extraordinary creatures' own and operate 90% of the mass media"! He was right. These 'extraordinary creatures' dominate and/or control almost all of America's media to include newspapers, magazines, TV and radio stations, books, records, movies, videos, wire services and photo agencies..Before the GOP attacked the media, a 'network' was precisely that -- a network of locally owned radio or TV stations. A CBS or ABC affiliate station, for example, was 'affiliated' with ABC --not owned by it! For such an outlet, ABC was just a source of news."


The Supreme Court proved willing to uphold the doctrine, eking out space for it alongside the First Amendment. In 1969's Red Lion Broadcasting Co. v. FCC, journalist Fred Cook sued a Pennsylvania Christian Crusade radio program after a radio host attacked him on air. In a unanimous decision, the Supreme Court upheld Cook's right to an on-air response under the Fairness Doctrine, arguing that nothing in the First Amendment gives a broadcast license holder the exclusive right to the airwaves they operate on. But when Florida tried to hold newspapers to a similar standard in 1974's Miami Herald Publishing Co. V. Tornillo, the Supreme Court was less receptive. Justices agreed that newspapers — which don't require licenses or airwaves to operate — face theoretically unlimited competition, making the protection of the Fairness Doctrine unneeded.

* (The Fairness Doctrine was a policy of the United States Federal Communications Commission (FCC), introduced in 1949, that required the holders of broadcast licenses to both present controversial issues of public importance and to do so in a manner that was, in the Commission's view, honest, equitable and balanced. The FCC decided to eliminate the Doctrine in 1987, and in August 2011 the FCC formally removed the language that implemented the Doctrine that  implemented the Doctrine.) 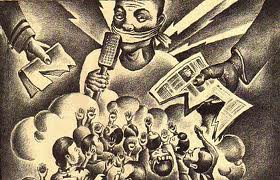 \Hart continues, "It was not until Ronald Reagan waged war on a 'liberal media' (in fact, a 'local' media) that smaller stations were routinely bought out and or merged with increasingly larger media conglomerates, in other words, huge corporations. By the early 90s, some six or seven huge corporations were reported to have acquired some 90 percent or more of all broadcast and/or cable programming in the United States.

"It was not until Ronald Reagan and the GOP gave 'license' to big corporations, that the corporate owners began to 'clone' their programming among their properties. It was not until the Fairness Doctrine was trashed that ilk like Rush Limbaugh were given license to flout responsibility, public service, the pursuit of truth or, if not truth, accuracy in reporting. Ilk like Limbaugh were given a license to lie, propagandize, proselytize on behalf of the increasingly rabid, ideological and utterly absurd GOP and the rabid right wing in general. 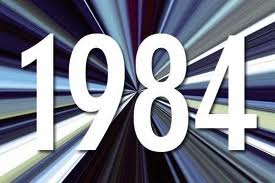 "'Reagan Revolution' is a misnomer. It was, rather, a reactionary counter-revolution which succeeded in undoing FDR's 'New Deal'"

From the Wikipedia article:

In 1985, under FCC Chairman Mark S. Fowler, a communications attorney who had served on Ronald Reagan's presidential campaign staff in 1976 and 1980, the FCC released a report stating that the doctrine hurt the public interest and violated free speech rights guaranteed by the First Amendment.

In August 1987, under FCC Chairman Dennis R. Patrick, the FCC abolished the doctrine by a 4-0 vote, in the Syracuse Peace Council decision, which was upheld by a panel of the Appeals Court for the D.C. Circuit in February 1989. The FCC suggested in Syracuse Peace Council that because of the many media voices in the marketplace, the doctrine be deemed unconstitutional, stating that:
At the 4-0 vote, Chairman Patrick said,
The FCC vote was opposed by members of Congress who said the FCC had tried to "flout the will of Congress" and the decision was "wrongheaded, misguided and illogical.". The decision drew political fire and tangling, where cooperation with Congress was at issue. In June 1987, Congress attempted to preempt the FCC decision and codify the Fairness Doctrine, but the legislation was vetoed by President Ronald Reagan. Another attempt to revive the doctrine in 1991 was stopped when President George H. W. Bush threatened another veto.

Fowler said in February 2009 that his work toward revoking the Fairness Doctrine under the Reagan Administration had been a matter of principle (his belief that the Doctrine impinged upon the First Amendment), not partisanship. Fowler described the White House staff raising concerns, at a time before the prominence of conservative talk radio and during the preeminence of the Big Three television networks and PBS in political discourse, that repealing the policy would be politically unwise. He described the staff's position as saying to Reagan:

...Reagan supported the effort and later vetoed the Democratic-controlled Congress's effort to make the doctrine law.

And the result?  A media dominated by the Conservatives as their own fiefdom, and for the desimination of their criminal propaganda:

From Hart:  "I don't believe that 'consolidated media' are serving or can serve 'public interests'. Nor can they be 'fully accountable and dependable'. If, for example, only one or two media conglomerates dominate in a single market it is doubtful that a diversity of opinions will ever see the light of day. In fact, as research reveals increasing levels of consolidation, it likewise reveals that fewer issues are covered from increasingly narrow points of view.

The most notable effects are local. Reporters say their stories are often edited and worse --refused! 'Exposes' in which advertisers are threatened by 'potentially damaging information', are routinely re-written to ameliorate potential damage to advertisers' reputations. At the very worst the 'offending' material is re-written, edited or censored outright. 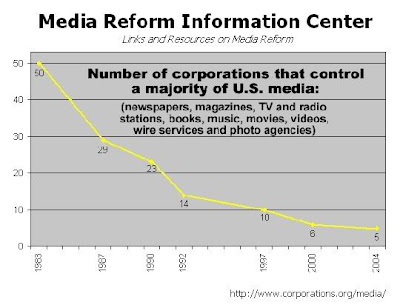 In 1983, 50 corporations controlled the vast majority of all news media in the U.S.
in 2000, the number had fallen to six. Since then, there have been more mergers and the scope has expanded to include new media like the Internet market. More than 1 in 4 Internet users in the U.S. now log in with AOL Time-Warner, the world's largest media corporation.
In 2004, Bagdikian's revised and expanded book, The New Media Monopoly, shows that only 5 huge corporations -- Time Warner, Disney, Murdoch's News Corporation, Bertelsmann of Germany, and Viacom (formerly CBS) -- now control most of the media industry in the U.S. General Electric's NBC is a close sixth.
--Media Consolidation -- a Historical Perspective

The term "media consolidation" is clearly detrimental and problematic. There are numerous reports of networks refusing to air 'anti-war' ads though they were 'paid'. Routinely, news stories may be revised or dumped should they offend a sponsor. Money itself is allowed to slant the news --wealth as propaganda!

Over the past several years, NOW has consistently reported on the topic of media ownership. The Federal Communications Commission (FCC) was created in 1934 with jurisdiction over radio, interstate telephone communication, and later television. But the FCC has always struggled with a fundamental lack of clarity about its proper functions. In its mission to serve the public interest, should the FCC crack down on indecency on the airwaves? Should it use its power to rescind the licenses of wayward stations? The FCC continues to face such questions.

When Conservatism is criminalized, the Fairness Doctrine will be reestablished, and the People will have access to all free speech - with the exception of that from the criminal cartel known as "Conservatism."

"When the gods wish to punish us they answer our prayers."