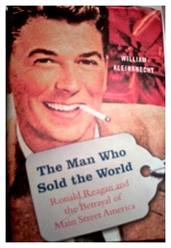 The Nation magazine noted in an editorial after Ronald Reagan's re-election that, "Those without a sense of irony about American politics may find it hard to believe that a man with such limited vision, mediocre intellect and narrow comprehension can cut a figure of world-historical importance."

An empty suit was our Ronnie, a mean old man in the obvious throes of Alzheimer's disease in the debates preceding his election, and the image that among his "greatest achhievements, that he was a "job creator" is the most hilarious.   A job creator?  No, much like Mr. Romney, Ronald was a job destroyer.   Hand in hand with Fed Chairman, Paul Volker, Reagan's plan to fight inflation was to eliminate jobs by increasing interest rates to levels still unmatched - resulting in the bond traders' adage, "One man's basis point is another man's job."

Disecting that terribly period in our history, where I personally saw three-piece suiters standing in line at Christmas to vie for temporary jobs wrapping presents at Sears, is a complicated task.   But for a handle on which President created the most jobs, it's important to point out which President destroyed the most jobs - without giving him credit for "restoring" those same jobs later in his term, like Saint Ronnie.

With plenty of warning, wealthy investors were able to lock up the highest interest rates in history, relaxing while millions were thrown out of work. 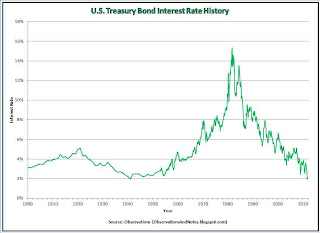 Even now, even with Republicans battling to kill a job recovery, they want us to believe that President Obama has made the recession worse and that Reagan was some sort of economic paragon who saved our country and that we should repeat his failed policies of trickle-down economics.

As pointed out last May in AddictingInfo.com, President Obama has had more success than Reagan in the first three years of their respective terms, and that "Reagan would envy Obama's economic record." (http://www.addictinginfo.org/2012/05/12/reagan-would-envy-obamas-economic-record/)

"The best way to examine both of these statements is to compare how these 2 presidents handled the economy during their first 3 years as president.

"Look closely at what happened during each president’s first 2 years in office.  By October, 2009, Obama’s 9th month in office, unemployment peaked at 10.1%.  After that, we started to see job growth and the unemployment rate declined over the next 2 years.  The longer his policies were in effect, the more the economy improved.

"Compare that to what happened during Reagan’s first two years.  Although unemployment was stable when he first took office, after about 7 months, it started rising.  After his first full year, unemployment climbed to 8.5% and it continued to rise throughout his 2nd year.  Nearly two full years after Reagan took office, unemployment was at 10.8%, higher than it ever reached under Obama.  It wasn’t until nearly 2 ½ years into Reagan’s presidency that unemployment finally dropped below 10%.

"Most of the job losses that occurred during Obama’s presidency happened during the first few months as a result of the deep recession that began a year before he took office.  Less than a year into his term, the economy showed steady improvement.  By contrast, the job losses under Reagan didn’t begin until about six months after he became president and continued to get worse for the next 18 months."

"It takes deep bravery to be fearless about one's own hypocrisy.  Politicians of average duplicity cower at being found out.  Not Reagan."  Columnist Colman McCarthy

As a footnote, we'll overlook Reagan's criminal masterminding of the Iran-Contra scandal for now, as well as his taking credit for the collapse of the Soviet Union - a tale that undoubtedly sent Gorbachev and Sarcharov into peals of laughter when they first heard him yelling at a wall.   Time is short and the Ronnie Myth is long, but we must note that taking credit for the fall of the Soviet Union is a bit too much for those who prefer truth over fable. --> http://en.wikipedia.org/wiki/Dissolution_of_the_Soviet_Union

Ichabod Crane: Villainy wears many masks, none of which are more dangerous than virtue.