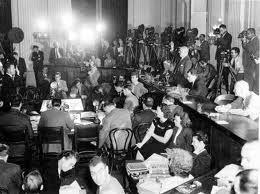 Beginning in 1789 with John Adams' Alien And Sedition Act, the United States has attempted through the 1930s to enact laws setting "...criminal penalties for advocating the overthrow of the U.S. government and requir(ing) all non-citizen adult residents to register with the government.

Approximately 215 people were indicted under the legislation, including alleged communists, Trotskyites, and fascists. Prosecutions under the Smith Act continued until a series of United States Supreme Court decisions in 1957 reversed a number of convictions under the Act as unconstitutional. The statute has been amended several times."

Thanks to Jim Bryant, the following links were provided to help explain some of the historical events intertwined within the Act:

Whoever, with intent to cause the overthrow or destruction of any such government, prints, publishes, edits, issues, circulates, sells, distributes, or publicly displays any written or printed matter advocating, advising, or teaching the duty, necessity, desirability, or propriety of overthrowing or destroying any government in the United States by force or violence, or attempts to do so; or

"Shall be fined under this title or imprisoned not more than twenty years, or both, and shall be ineligible for employment by the United States or any department or agency thereof, for the five years next following his conviction.

"If two or more persons conspire to commit any offense named in this section, each shall be fined under this title or imprisoned not more than twenty years, or both, and shall be ineligible for employment by the United States or any department or agency thereof, for the five years next following his conviction.

These cases are a start for showing our lawmakers how to implement further legislation to criminalize Conservatism. Much of the "anti-American" furor of Joe McCarthy in the 1950s was misguided and used as tools by Conservatives to instill hate and fear in the populace.  It's time for these tools to be used to bring down the evil of Conservatism. 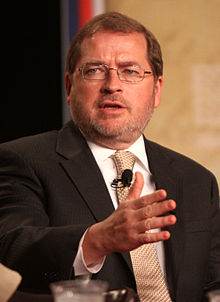 Grover Norquist, the Conservative consigliere who made more than 270 members of Congress, and nearly all of the 2012 Republican presidential primary candidates, sign a pledge promising never to vote to raise taxes, and one of the most important people in Washington D. C., is famous for two things: avoiding the prosecution that brought down capo Jack Abramoff down and most famously, for voicing the final goal of the Conservatives - "I'm not in favor of abolishing the government. I just want to shrink it down to the size where we can drown it in the bathtub."

Norquist also said that his goal was to take us back to the time "up until Teddy Roosevelt when the socialists took over. The income tax, the death tax, regulation, all that."

The confidence of the Conservatives going into the 2012 Election is staggering; their rhetoric seems to tell us that they know that they are taking the House, Senate, and White House and don't care if the People know what their true motives are - as if they know no one can do anything to stop them.
The last time the Conservatives were so blantantly honest about their goals was in the Presidentila Election of 1800, where their defeat made them realize that they should never, never reveal their true goals if they wanted to win offices in a democratic repubic.

You'd think that they know that they have the numbers to win based on the numbers of Democratic-leaning voters they've eliminated through voter suppression laws, by the numbers of Democratic-leaning voters they're going to eliminate by voter intimidation and miscounting of ballots, and by the coup de grace of the modern day election tabulation - voter machine hacking.
If the worst happens, the only way we will know if the 2012 Election was rigged is through exit polling. And watch the Conservative bully-boys decry the scientific method used in exit polling.

"In the sweetness of friendship let there be laughter, and sharing of pleasures. For in the
dew of little things the heart finds its morning and is refreshed."