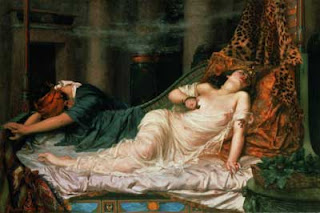 Mr. Romney's obscene plan for ridding the country of its undocumented workers is short and sweet: "Self-Deportation," a Do It Yourself method of ridding Conservatives of Democratic-leaning brown people, the worst kind of brown people in the Conservative world.  While this sounds like a volunteer program, self-deportation occurs when undocumented workers are prevented from working, which in turn prevents them from eating, drinking, keeping clothed, or having a roof over their heads - in short, from living.

But this original and pithy turn of phrase, "self-deportation," suggests a solution for ridding our country of the plague of Conservatism, the political philosophy that seeks to take us back to the days of feudalism - which will restrict our ability from living for the whole country, documented or not: "Self-Annihilation," a concept surely no less attractive to the average Conservative as self-deportation is to the average undocumented worker, and not without precedent in ancient Rome and other countries in Western Europe.

Witness the characters in so many of Shakespeare's plays who self-annihilated, saving the citizenry from footing the bill for deportation or incarceration, much less providing the climaxes to the Bard's tales!

We all remember Lady MacBeth, who cajoled her husband into murdering King Duncan (an act somehow reminiscent of Bush's lynching of Saddam Hussein) followed by the murders of his pal Banquo, MacDuff, and MacDuff's wife and children.  After losing her mind, Lady M saved the state the huge amount of money it would have taken for a lifetime of treatment in a mental institution by killing herself.

Cassius, in Julius Caesar says, "Guide thou  the sword (then Pindarus stabs him).  Caesar, thou art avenged.  Even with the sword that killed thee."  (Cassius dies)

In the same play, Brutus self-annihilates, then even his wife Portia  saves the strain on the Roman wartime budget, as he notes, "With this she fell distract, And, her attendants absent, swallow'd fire."

Othello, recounting how he had once killed a Turk, acts out the deed: "I took by th' throat the
circumcised dog, And smote him -- thus. (He then stabs himself)

Skipping over those not involved in the political scene, Romeo, Juliet, and Ophelia, we come to the quadruple suicide of Eros, Charmian, Cleopatra, and Marc Antony - certainly not the equal of the numbers of the Jonestown Kool Aid self-annihilators, but certainly more poetic, more heroic.

And now self-annihilation offers Conservative leaders, their spouses and followers the same poetic, heroic solution to the ills of their country and fellow citizens.

For those Conservatives less suited to the ancients' ability to ignore physical pain, modern science offers methods much less forceful than the knives and asps used by the self-annihilators in Shakespeare's plays.  Modern options cover familiar methods like filling garages with carbon monoxide from car exhausts and purchasing lethal amounts of Oxycontin, an easy task for well-heeled Conservative as we learned from Rush Limbaugh.

And many more would pay to watch the excitement of Conservatives self-annnihilating than would pay for tickets to see the boring drama of undocumented workers self-deporting, helping to relieve the monstrous budget deficits placed on our backs by the GOP.  And the costs of a mass deportation program compared to a self-financed, self-annihilation program is staggering.  Finally, a program to harvest the organs of self-annihilated Conservatives for scientific research would be the start of a medical Renaissance in our country.  The possibilities are without end.